We had less than 48 hours to explore Hanoi, Vietnam’s capital located in the far north lies in a bend of the Red River. Vietnam is one of the destinations that I have always wanted to visit – savouring real Vietnamese food, experiencing the real Asia and admiring French colonial architecture. 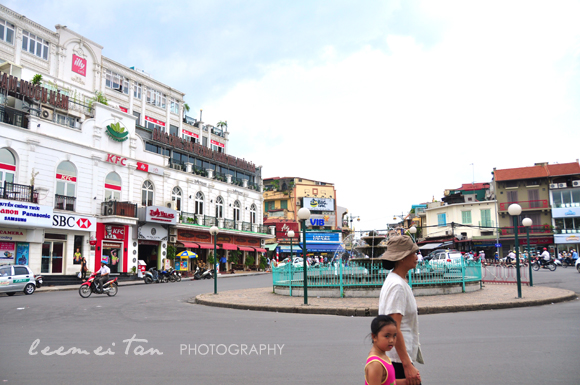 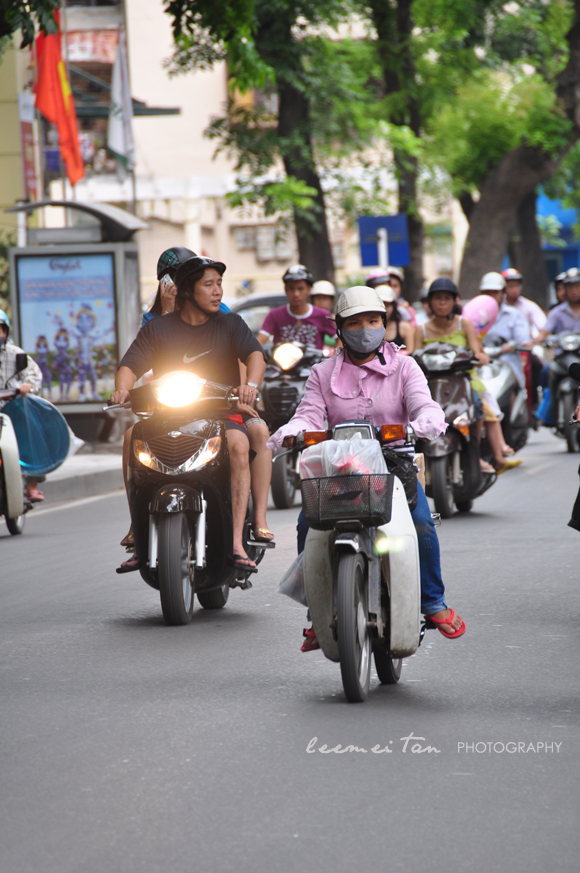 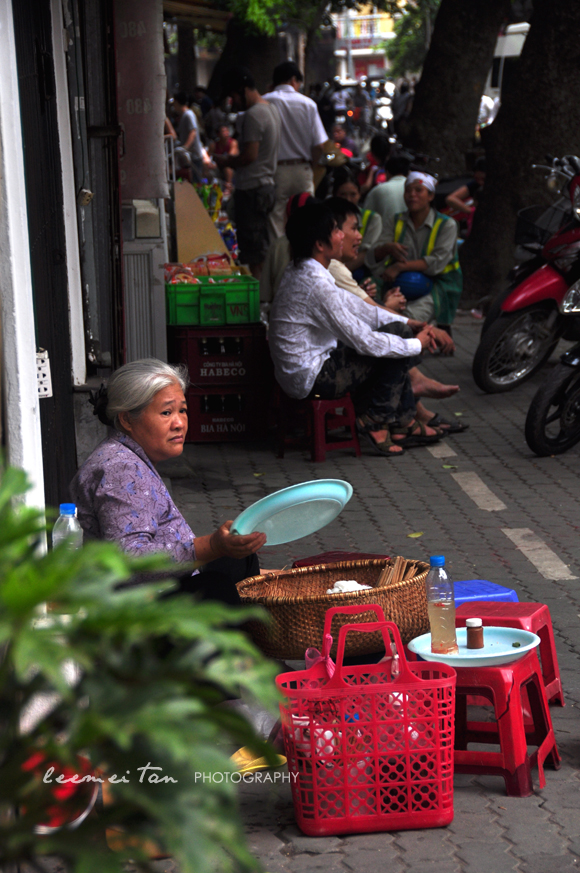 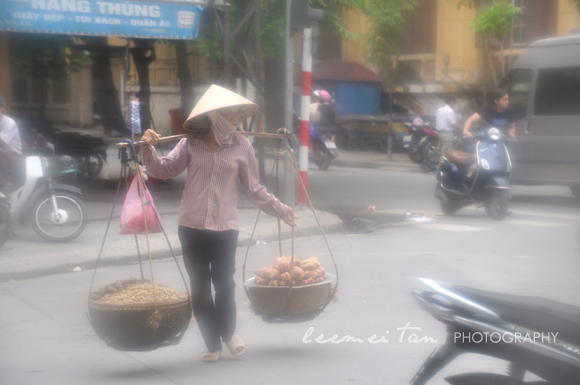 From the moment I stepped my foot in the old quarter of Hanoi, I could already sense the difference – very hot and humid, motorbikes were honking their horns non-stop, and lots of food stalls at every corner. Crossing the road had never been so difficult, as the motorbikes came from every direction and rarely stopped for the pedestrians. Some didn’t even bother to stop when the traffic light turned red! So, the first few hours of being pedestrians were kind of difficult, not only to make sure we were on the ‘safe’ and right path, but also to beat the heat!

We were based in the old quarter, within walking distance to Hoan Kiem Lake. The first impression about Vietnamese people is their friendliness. We were pretty early for our check-in but they tried their very best to make it possible. It was a relief to cool down by taking a cold shower before heading out to feed our hungry tummies.

For the first day in Vietnam, Quan An Ngon was a good idea to start off as it is a place where you can have all Vietnamese street food under one roof! There are different mini-kitchens that serve up all the street food you could name. The menu is really impressive with more than 80 dishes to offer! Screening through the menu took me probably about 8-10 minutes and another 5 minutes to decide what to order. For a foodie, ordering food had never been so difficult (just imagine to choose few out of over 80 dishes) as I wanted to try all if I could! 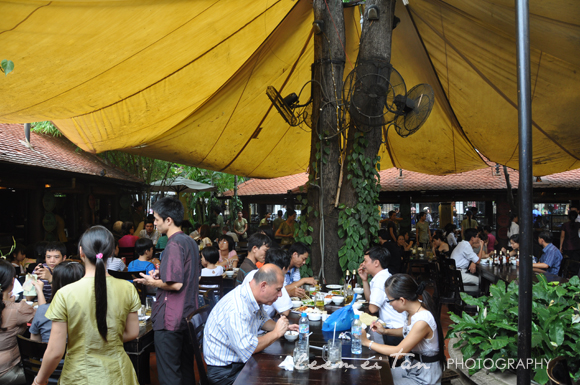 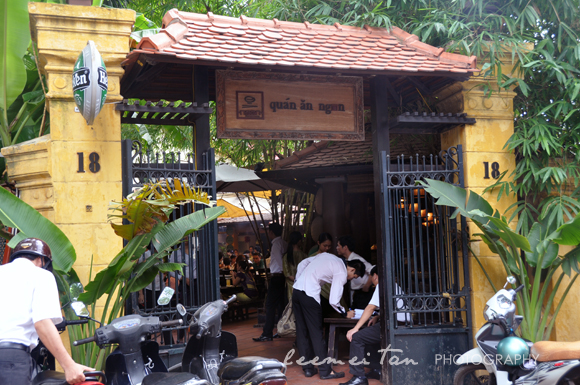 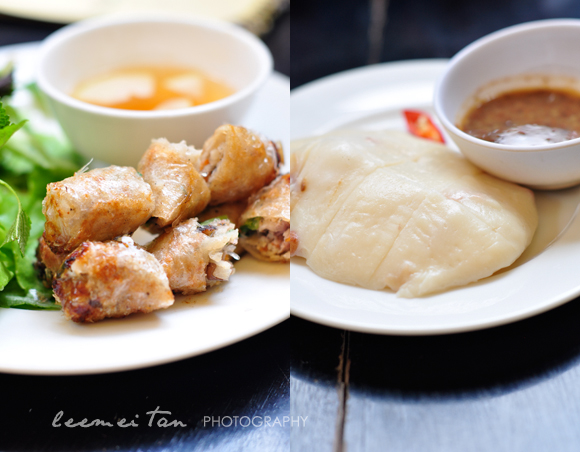 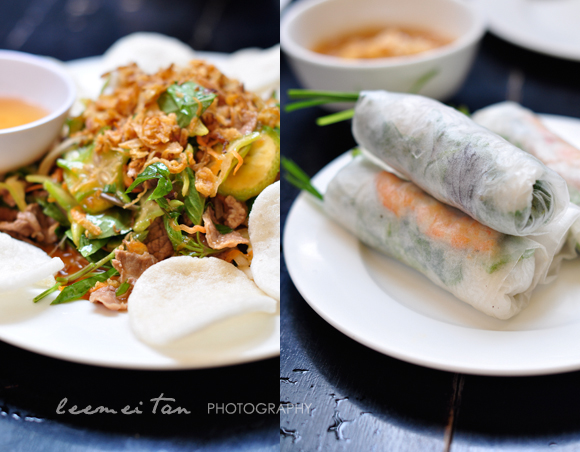 After a fabulous lunch, a walk to Temple of Literature was a great idea to check out Hanoi also to help digestion. Temple of Literature, called Van Mieu in Vietnamese, is one of the oldest sights in Hanoi. It was founded by Emperor Ly Thanh Tong in 1070 dedicated to the Chinese philosopher Confucius. It later became Hanoi’s first university. 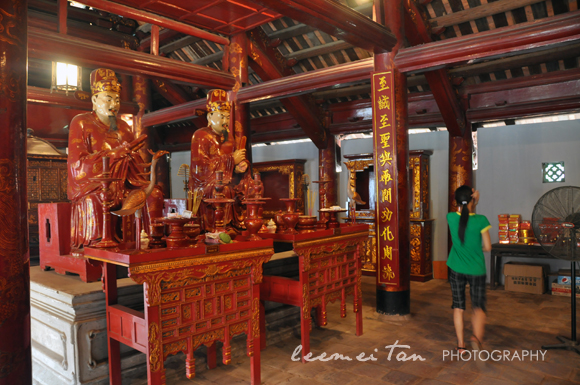 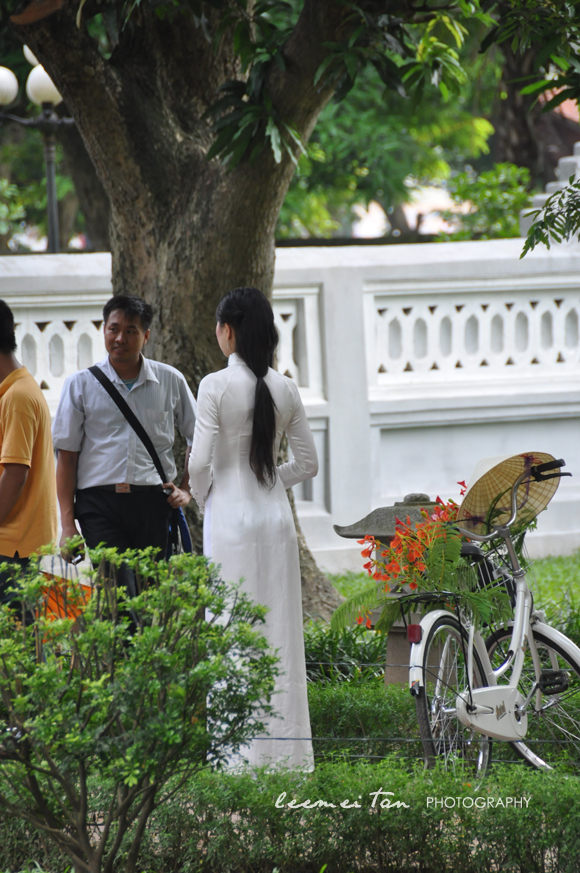 It was quite a hot afternoon, I think the temperature must had been 38°C or more! I felt exhausted and sleepy. We later made our way to Hoan Kiem Lake, sat down under the shade. It was really the moment that I took my time to soak up the sights, sounds, and smells of Hanoi. A lot of people were chilling out at the park – chatting and spending their time with friends and family. 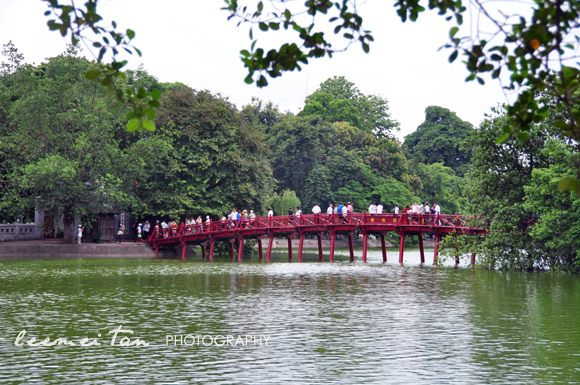 Some locals enjoyed their afternoon at the shaded roadside noodle stalls, slurping up their bowls of Phở. Some where enjoying Nuoc Mia (sugar cane juice) with lots of crushed ice to cool down. Sugar cane juice is always my favourite drink, so, without thinking much, I thought I needed a glass. The juice was freshly pressed, half of a calamansi/limau kasturi/citrus microcarpa was added! I have to admit that I never had sugar can juice with calamansi, the taste was surprisingly good – natural sweetness of sugar cane with a hit of citrus, was so refreshing, which was what I needed during a hot day! 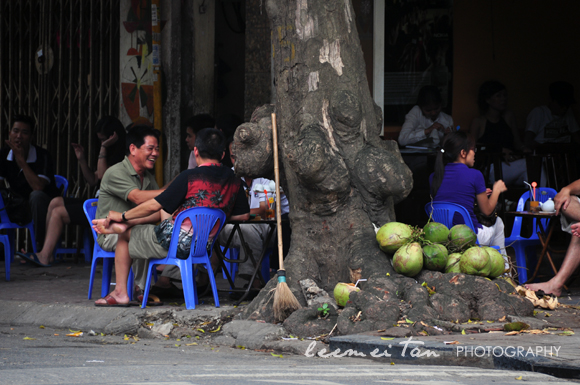 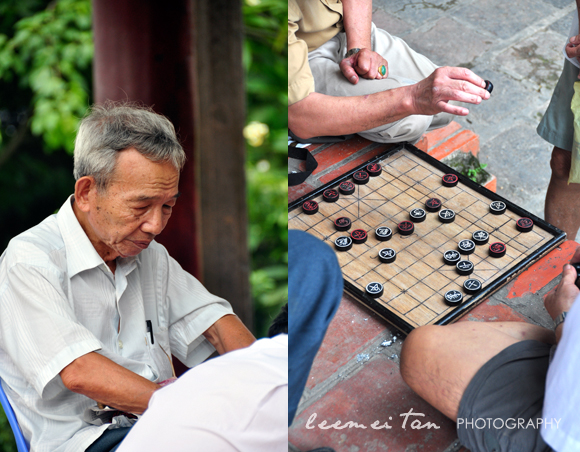 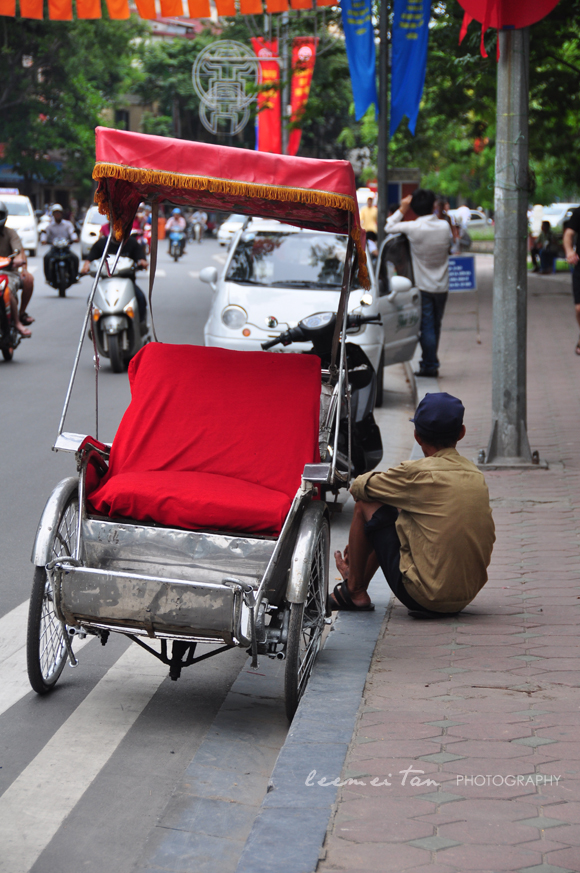 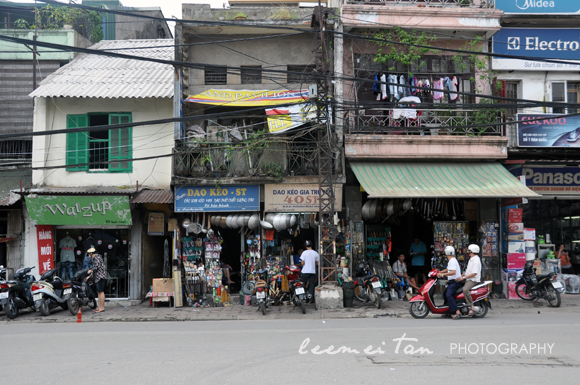 Not far from the lake, situated Thang Long Water Puppet Theatre. Water puppetry started in the villages of Red River Delta as far back as 11th century. The tradition has been passed down since then. The puppet show is something that shouldn’t be missed while in Vietnam. After chilling out near the lake, we walked to the theatre and checked if we could get tickets there and then. We were pretty lucky as it was just another 15 minutes wait for the second last performance. 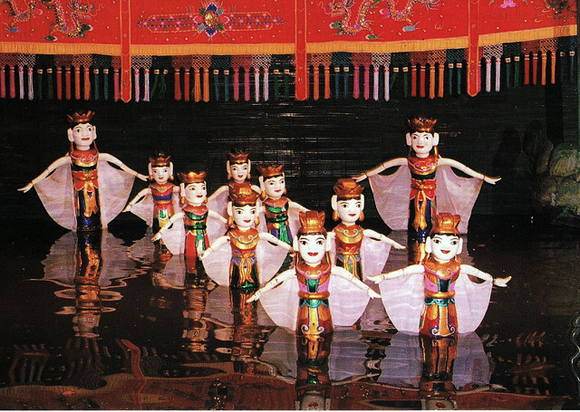 The puppets are made of wood and then lacquered. The performance is carried out in a waist-deep pool, where large rod supports each puppet under the water, used by the puppeteer to control the puppet behind the screen. The show started with the Vietnamese orchestra, provided background music during the water puppet show. A few traditional songs were played before. Then, the puppets appeared and  moved over the water. The singers sang songs during the performance to tell the story of each scene acted out by the puppets.

In Hanoi, there is a restaurant frequented by Hanoian and tourists from all over the world. Before writing it further, some of you might have guessed which restaurant I wanted to talk about. Even though, this restaurant seems to have mixed reviews, I wonder those bad ones were based on the wrong restaurant that serves the same dish (there’s one restaurant has the same name just a few steps away!) I said to myself that if I didn’t try, be it good or bad, I would then leave Hanoi without knowing the truth and it would for sure bother me!

Cha Ca La Vong, located  at 14 Cha Ca street is famous for nothing else but just one dish – Cha ca (grilled fish). This much talked about restaurant has been around for many years and the business now is run by the 5th generation of the family. When we made our way to the restaurant on the 2nd floor, we were handed a piece of paper that stated: “We serve one dish only – fish and noodles – 120,000 Dong per person”. I think the price has increased from 80,000 Dong to 120,000 based on my research. 120,000 Dong is equivalent to £4.00, € 4.80, $6.30, which I think is pretty expensive for Vietnamese standard. Once we placed our orders, I started to look around and noticed there were quite a number of locals eating there too and I started to wonder if they pay the same price? 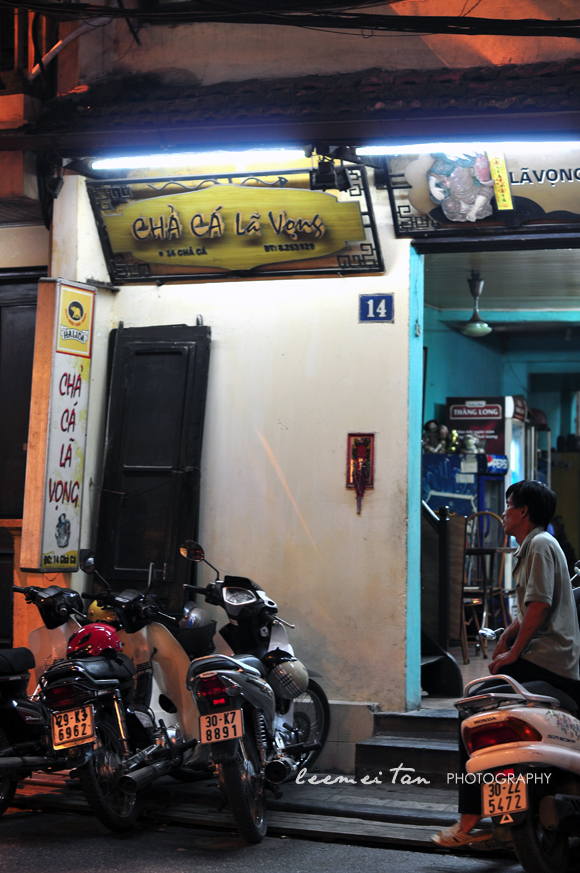 Anyway, that wasn’t really a concern. I was pretty happy to spend £4.00 to experience this dish. Cha ca consists of silky-soft noodles, a big bowl of dills, spring onions and some herbs, bubbling pan of moist and turmeric-scented fish pieces placed on top of a traditional charcoal stove, more fresh herbs, nouc cham (sweet, sour, and spicy dipping sauce), sliced chilies and some toasted peanuts.

We were pretty clueless to serve this when it was presented in front of us. But, without wasting one second, I checked the Vietnamese couple sitting beside me and quickly figured out. Dills, spring onions, and herbs (on the left photo below) are added into the bubbling pan that is filled with pieces of fish, mix well and let the herbs and leaves cooked until soft. In the individual serving bowl, put in some rice noodles, some fresh herbs, chilies (if desired) and some nouc cham. Then, spoon in a few pieces of fish, drizzle a bit of the oil, and topped with a small handful of toasted peanut. That’s how easy it is to enjoy this dish that is full of flavours! I thoroughly enjoyed it! 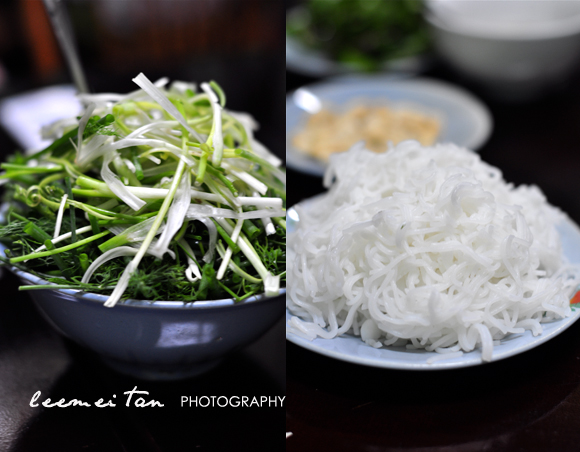 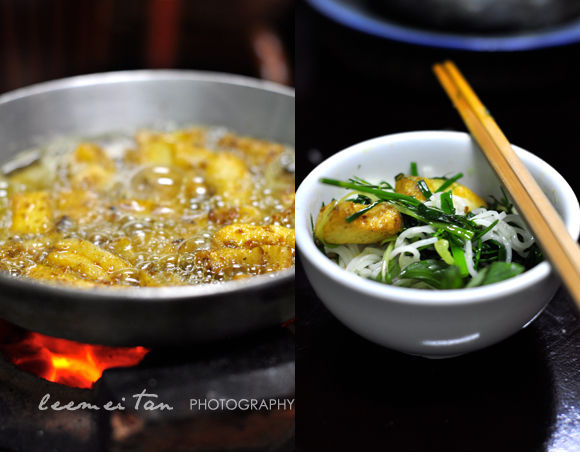 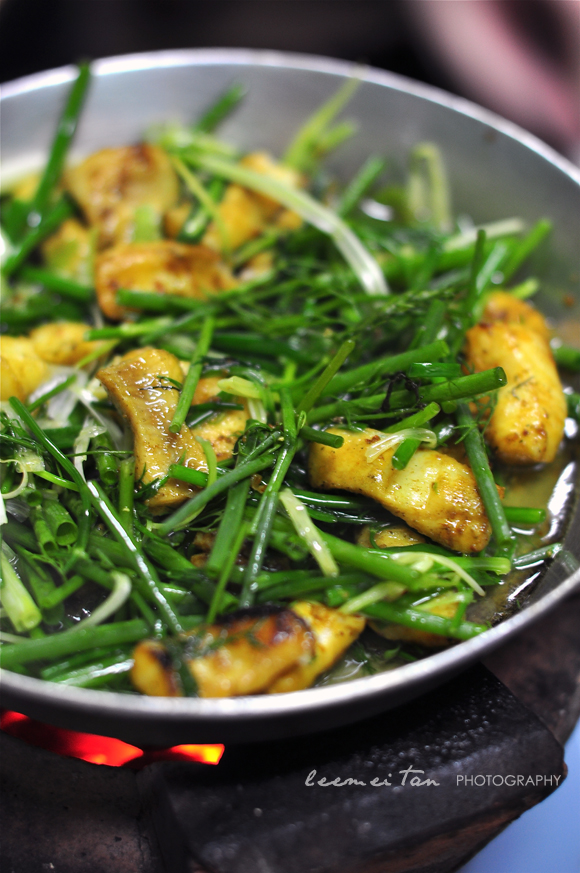 The following day, we said goodbye to Hanoi and headed to our next destination – Halong Bay. Halong Bay is a UNESCO World Heritage Site, a very popular destination which is about 170km northeast of Hanoi that takes about 3.5 hours by road to get to Halong city which is the gateway to Halong Bay. Halong Bay literally means descending dragons. Legend says that when Vietnamese were fighting against their invaders from the north, gods sent a family of dragons to help defend their land. The family of dragons descended and began spitting out jewels and jade. These jewels then turned into various islands and islets, then formed a formidable fortress against the invaders. 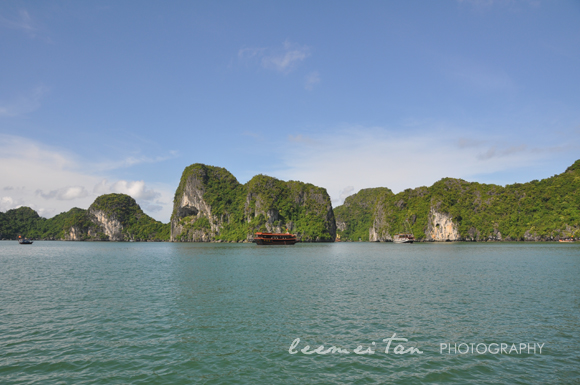 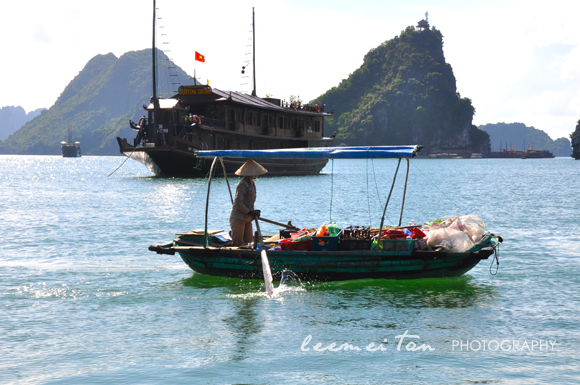 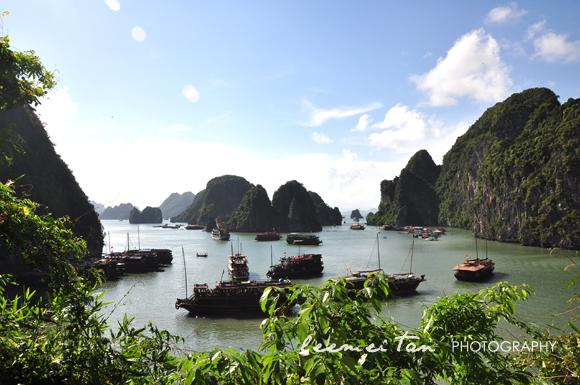 There are plenty of tour agencies in Hanoi offer different Halong Bay cruises depending on budget and the duration of stay. We opted for a 2 days 1 night package, which costs US$90 per person, that includes transfer from Hotel to Halong City, boat transfer, an en-suite double bedroom on the boat (called Calypso), and meals included except drinks. Views at Halong Bay were amazing, it does look a bit like the mystical landscape of limestones islets to Guilin in China. 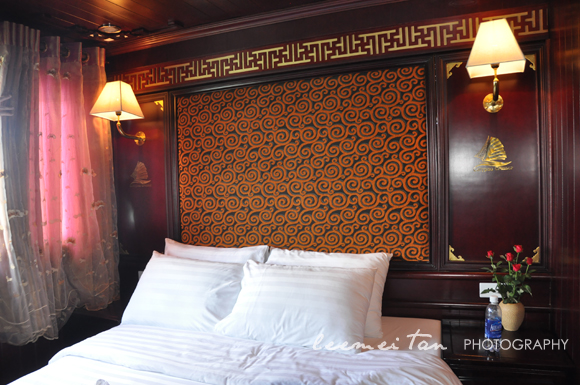 Halong Bay consists of a dense cluster of 1,969 limestone monolithic islands, each topped with thick jungle vegetation, which rise spectacularly from the ocean. There are around 1600 people live on Halong bay in 4 fishing villages. They live on floating houses and are sustained by capture fishing and marine aquaculture. 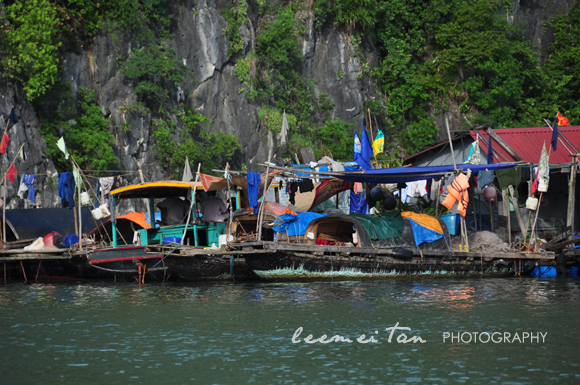 Taking in the magnificent views and enjoying the relaxing cruise with excellent backdrop all along the way was breathtaking and definitely a great way to chill out before heading to our destination. 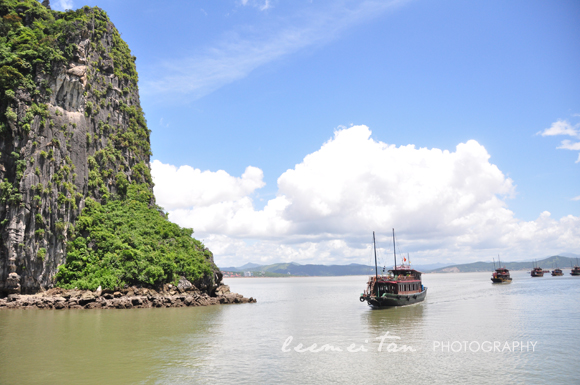