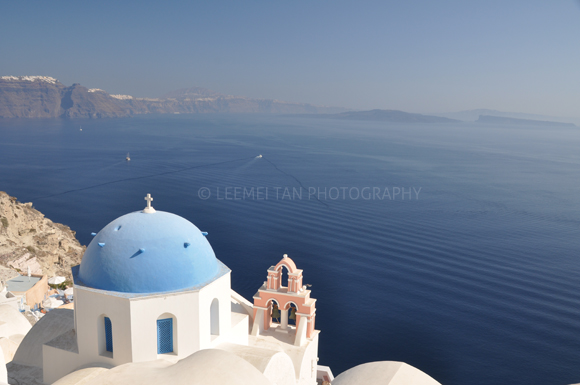 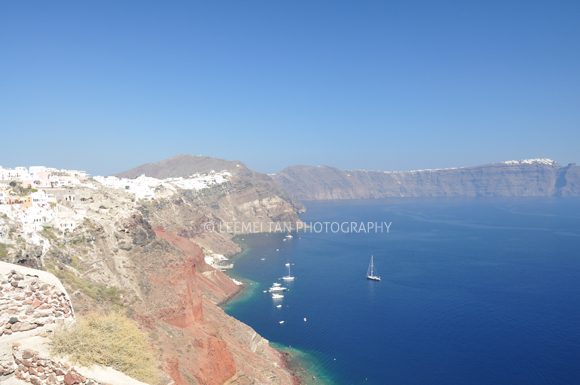 Greek islands holiday isn’t complete without visiting Santorini. Santorini is also known as Thira/Thera. It is a small circular archipelago of volcanic islands. Also, one of the world famous islands that is located at the southern most island of Cycladic group in the Aegean Sea.

Santorini is the most spectacular of all the Greek islands and also one of the most expensive one! A lot of tourists are drawn to Santorini because of its unique landscape, the archaeological discoveries and the legend of Atlantis. The island is the largest fragment of a volcanic archipelago made up of the broken remnants of the largest caldera on earth.

Fira is the capital of Santorini. We arrived at Athinios, about 4km south of Fira. Anthinios is at the bottom of the caldera cliff face, it is backed with ticket agencies and tarvenas. We decided to choose Oia (pronounced as ‘Ia’ and ‘Eea’) as our base during our stay in Santorini. 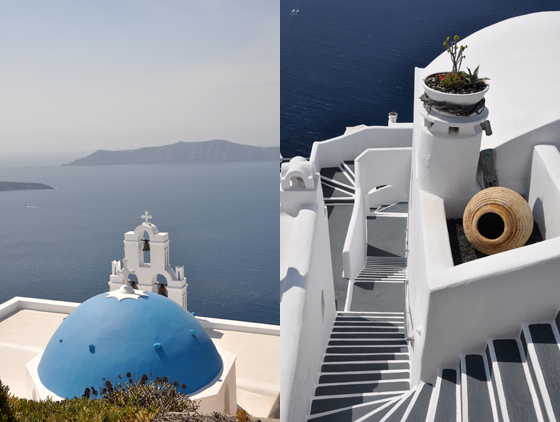 Oia is situated at northern part of the island and as you may know, Oia is popular for its sunset and probably has the best view of the caldera. Every evening (almost, I think), large group of people arrive just to see the sunset. There’s a sunset view point that is full of tourists with their cameras by about 7pm! This is probably the only think that I don’t like as it doesn’t make the sunset special anymore. I didn’t enjoy the sunset as much as in Naxos, simply because it feels more like a duty to wait for the sunset rather than just enjoying it.

I don’t know if I was going mad but I thought I saw a lot of blues and whites in Santorini than Naxos? Maybe because there are lots of houses/villas built closed to each on the cliff. From the first glimpse, there is a massive contrast – blue sky, deep blue sea, brown/grey rocks, white houses, blue doors, blue windows, salmon pink, fuchsia colour flowers…OK.. blue objects couldn’t run away from my shutter! 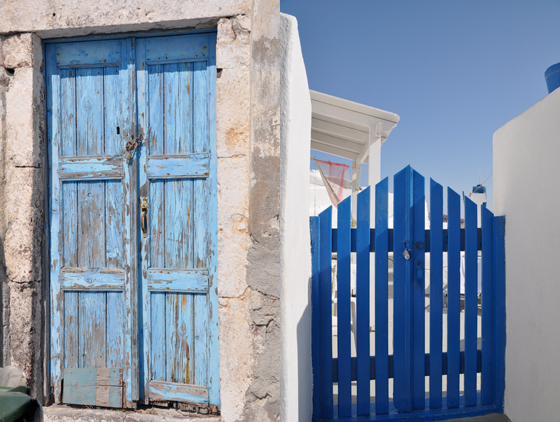 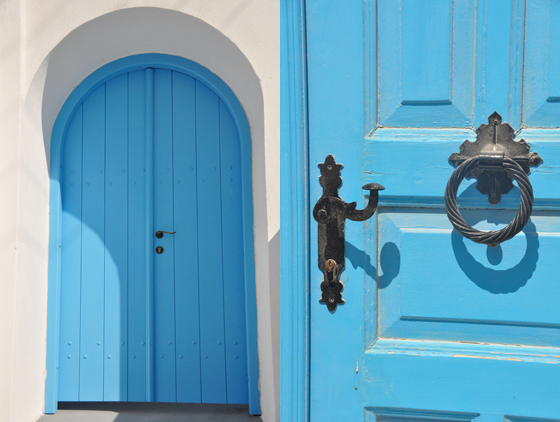 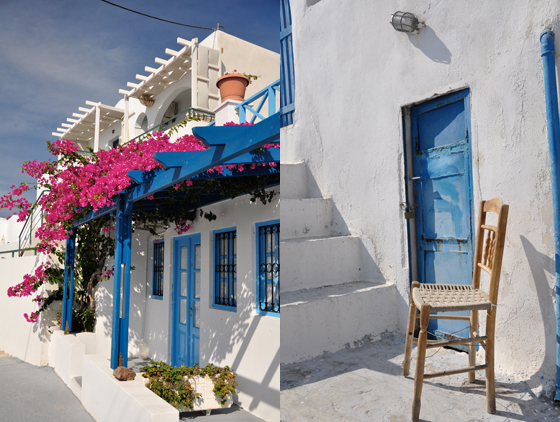 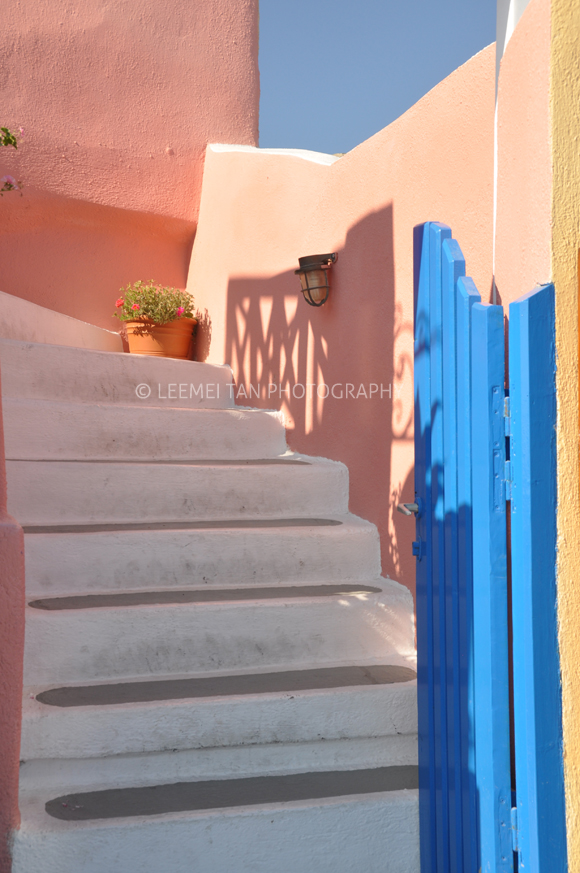 Well, I like the look and feel of Oia when it’s less crowded. People tend to dress up nicely in Oia, that seems to be a bit posh. Accommodation is definitely more expensive than Naxos. We probably have gone overboard, pampering ourselves for our 3 -night stay at Greek Habitat.

We wanted to get the feel of living in the traditional house in Santorini. A lot had been booked! At first, I was thinking of either Lucky Home or Marizan. But, no luck! Mystique was out of question!! Accommodation in Oia gets snapped up very quickly! So, if you want to go to Santorini and Oia is where you want to stay, make sure you book your accommodation well in advance especially during Peak seasons (Jul – Sep)! 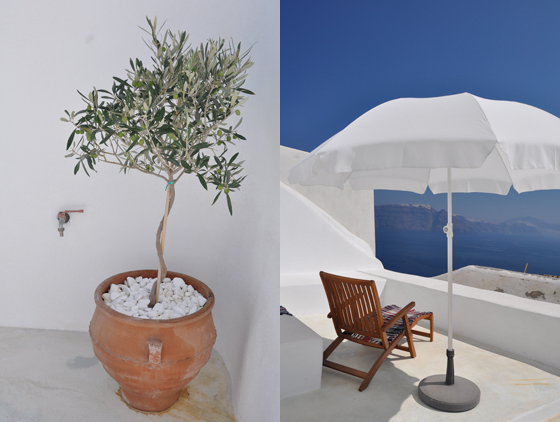 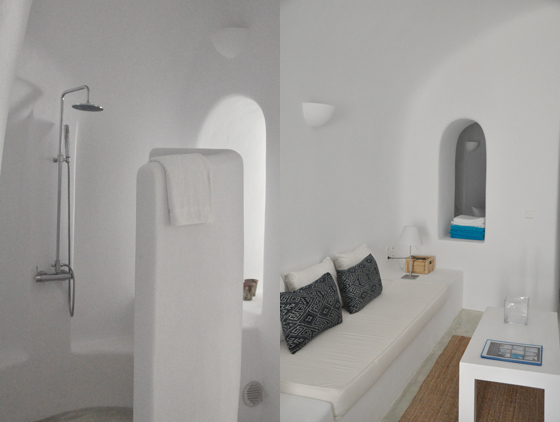 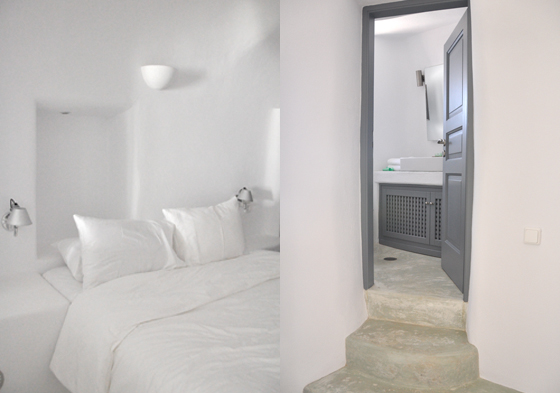 One thing that I regret is that I didn’t note down all the restaurant names (blame on the views of Santorini that took everything over!) I tried Parmesan cheese and rocket salad with balsamic and honey dressings, which wasn’t really that great. I guess, the only bit I didn’t like was there was too much dressings in the salad! 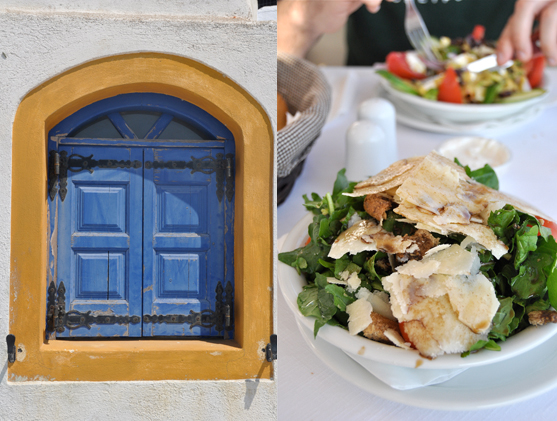 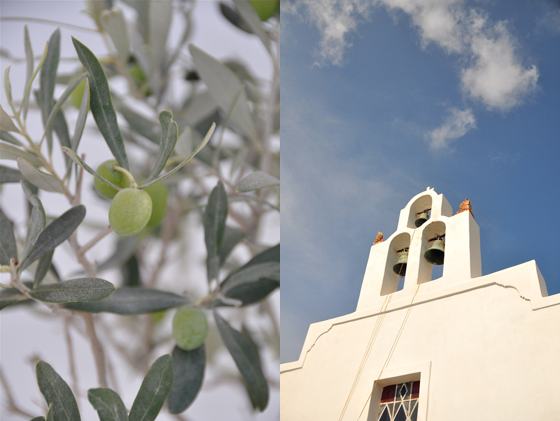 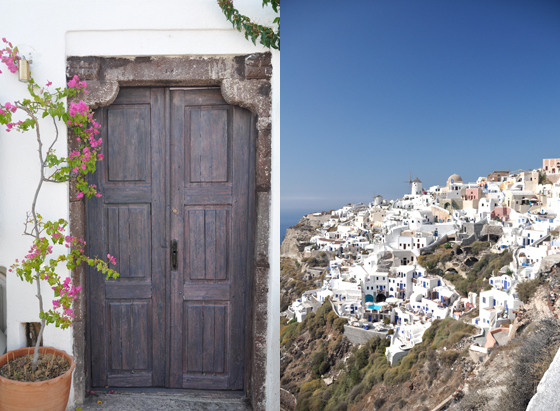 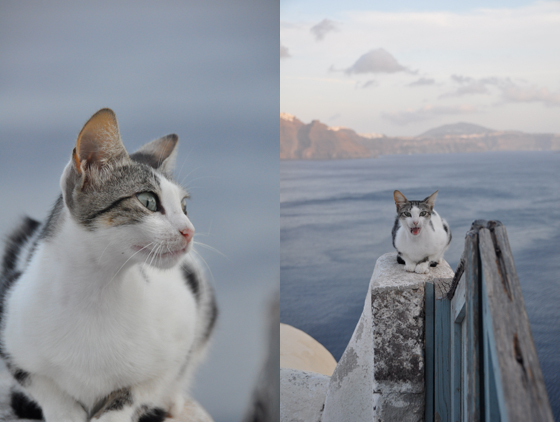 Something that I have learnt about Santorini is that this island is famous for a few produces such as Fava beans, cherry tomatoes, white zucchini/courgettes, etc. Thanks to the fertile volcanic soil! We had a fantastic traditional meal at one of the restaurants (I apologize that I forgot to note down the name, again! Next time, I will write down). It wasn’t in Oia, if I am not mistaken, it was either in Messaria or between Messaria or Pirgos.

Well, you don’t have to go to this specific restaurant that I went though – we simply dropped by there during lunch hour after a long hike! The point is when in Santorini, do try out stuffed cherry tomatoes topped with feta cheese – the 2nd picture below. The cherry tomatoes were really sweet!  We shared a farmer’s salad, shown in the 1st picture – lots of cherry tomatoes again, olives, onions and feta served in a cheese crisp salad bowl! 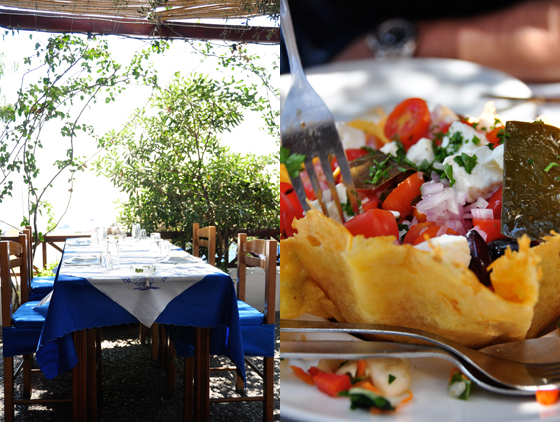 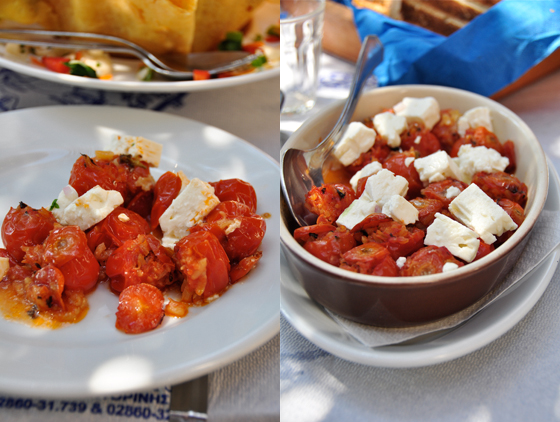 Fira is best explored in the morning when it is cooler, the rising sun gives the buildings a lovely warming flow, the glowing of cobalt-blue sea and less tourists. The are many shops and tavernas or restaurants to choose from for lunch or dinner. Price wise, it is cheaper than Oia! 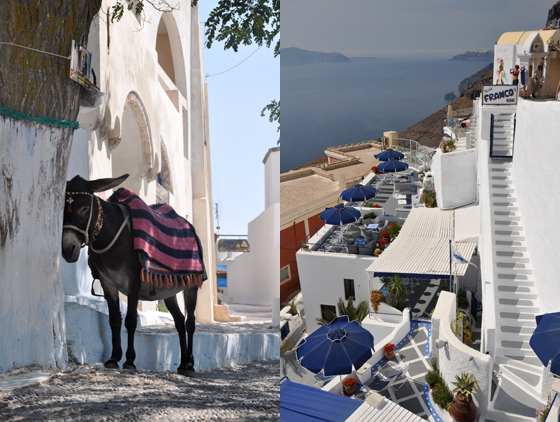 If  you feel like you have eaten too much for lunch, you probably would be up for the challenge to hike down 600+ stairs from the top of Fira to the Fira old port! Well, there are 2 other options if you are not up for the challenge: a) to take a donkey ride, b) to take the cable car. The donkey ride costs €5 each way or €4 for the cable car. So, the modern technology is cheaper than the donkeys. Anyway, it would be a good experience if you have never been on donkeys. We tried – I personally don’t like it. It was kind of scary and not too comfortable! 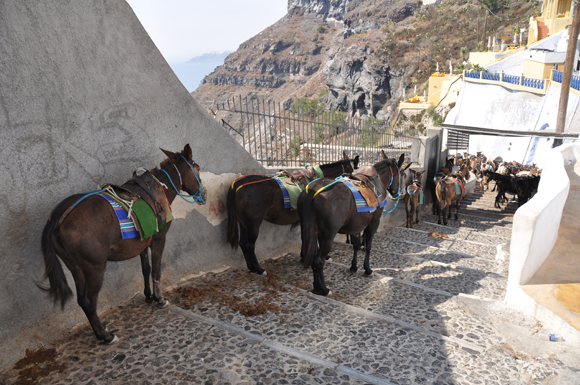 So, it was pretty obvious that I didn’t take the donkey to go up to Fira town but I hiked 600+ steps….. NOT! We took the cable car! That saved us a bit of energy to take the scenic walk from Fira to Imerovigli. All along the way, the views were just spectacular! 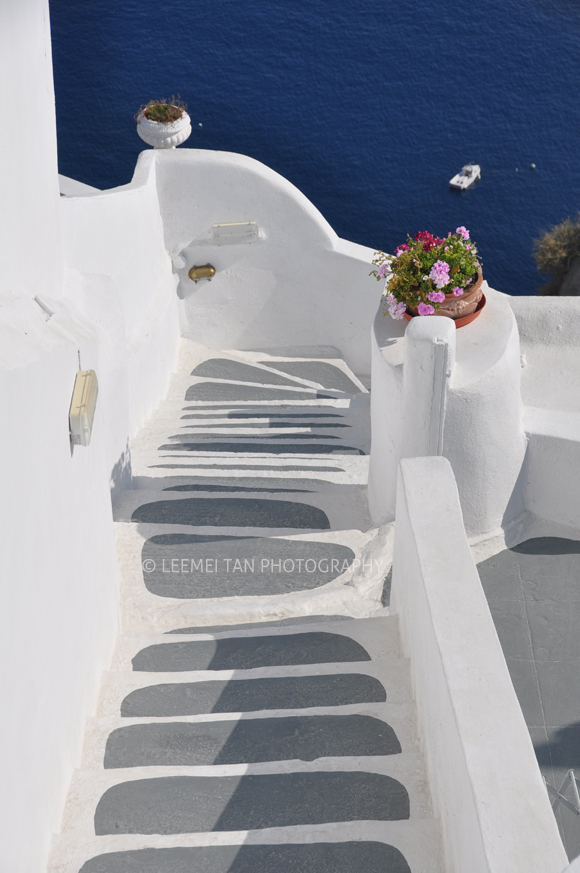 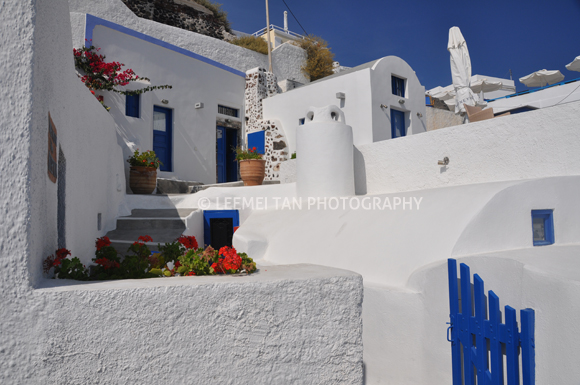 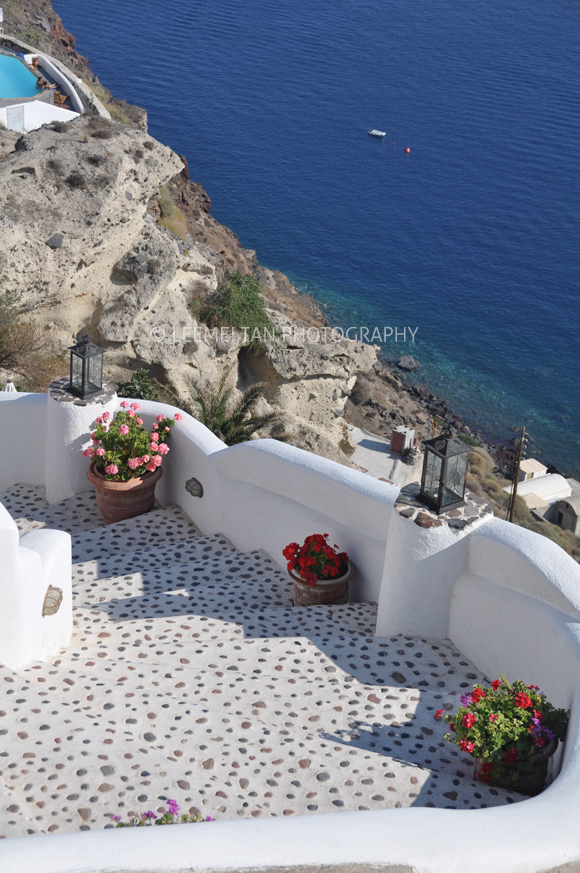 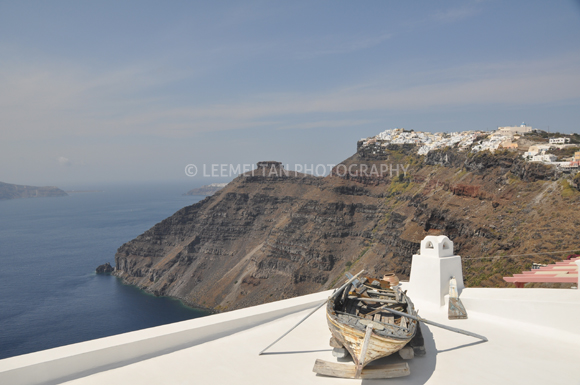 Red beach is very well known for the unique colour of the sand and the hill behind it. Soaring red lava cliffs which drop right to the sandy shore and into the clear blue sea, make for a majestic setting and one to enjoy. The beach is located near the village and ancient site of Akrotiri. 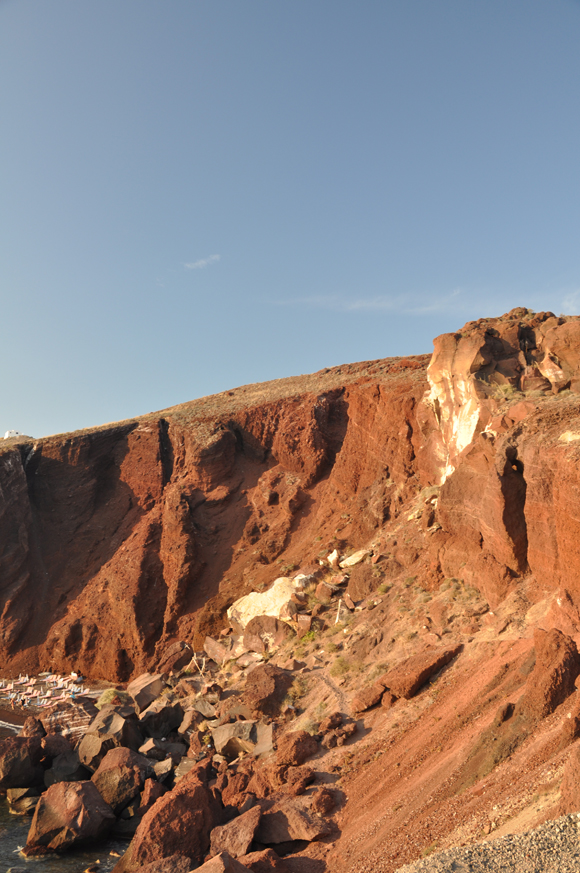 So, what else is Santorini famous for? If you love wines, do spare some time to taste Greek wines. Santowines and Hatzidakis are the recommended ones. We first went to Santowines, even though the view was kind of nice there (picture 1 below),  but it was too commercial for our likings. Furthermore, you have to pay for wine tasting at the bar?!

We left. Later, we found the gem – Hatzidakis (picutre 2). It’s a family run business, it wasn’t wine tasting at the bar but in an underground wine cellar – la cave. That’s what I expected! No charge for a few sips of different wines! The owner of the winery explained to us that Santorini is famous for its white wine and of course, the speciality is Vinsanto.

Vinsanto is a sweet white wine, aging in oak barrels Santorini. The colour is not exactly white because to make Vinsanto, ripe grapes are laid in the run to raisin, usually for 8 to 14 days. Then, undergo a long and slow fermentation. Vinsanto is low in alcohol and barrel-aged for a period of years before being bottled. 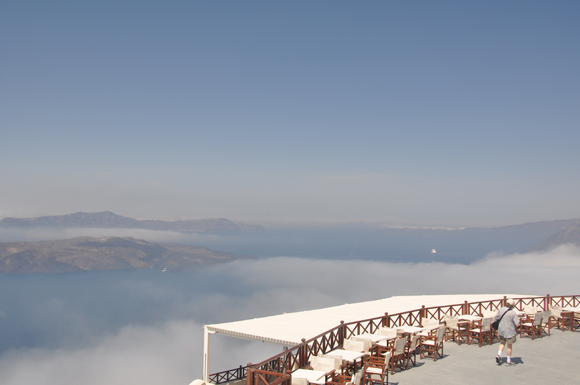 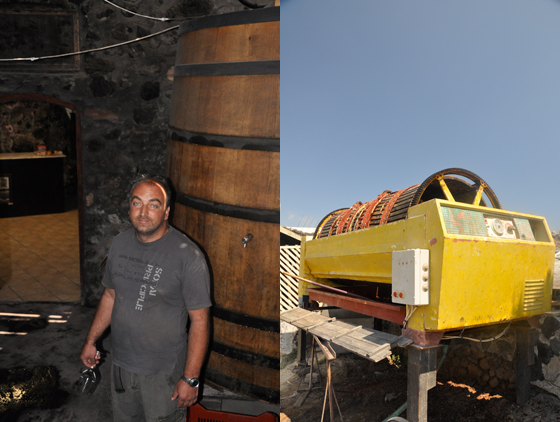 The sunset was great but the only annoying thing was – there were too many people as I mentioned. By night, the whole look and feel of Santorini changes. You can spoil yourself a nice meal at Ambrosia. They serve Modern Greek cuisine. We were told it was great and the food was amazing. Well, the view is a killer but sad to say not the food. It was too expensive for what it is. I like only the Fava puree with caramelized onions served with Octopus. So, you can save your money or you might have different opinions? 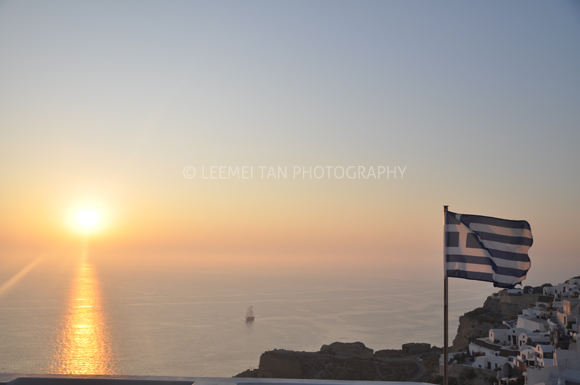 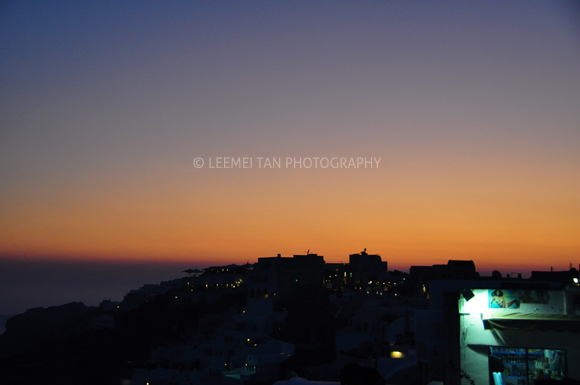 Despite a slight disappointment of the dinner, I was pretty happy with my experience in Greece. One thing that is worth mention about is the coffee drinking culture in Greece. I saw a lot of the locals drank what looks like expresso topped with creme served in a slim glass. I was curious. I asked. I was told it’s Cappuccino Freddo which is very popular in Greece.  Not a coffee drinker myself, I was tempted. I tried. Not as what I described before, it was coffee, sugar, milk, and lots of ice. The ingredients are then blended, served in the nice looking glass. It was really good! 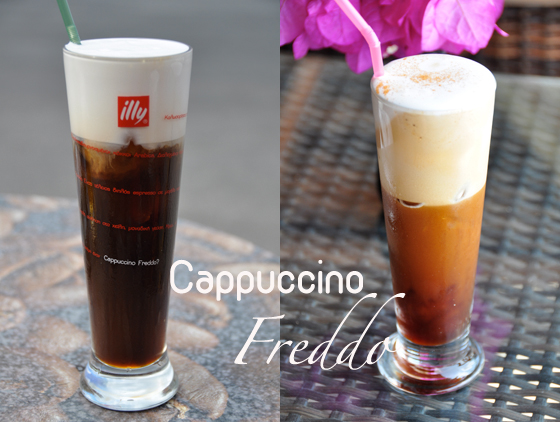