Last month, we made our first ever visit to Moscow, one of the cities that I have always wanted to see. We travelled with a friend of us and it was for 5 days and 4 nights. Luckily enough, Arnaud has a friend who lives in Moscow, who has kindly offered to show us places. Without him, our trip wouldn’t have been filled with so much fun –  seen places that we wouldn’t have seen and eaten delicious food at different restaurants! Steve (if you are reading this), thanks so much for being such a great guide!

I have to admit that I don’t know much about Moscow, not to mention the kind of food I should be expecting. I only knew that it’s famous for its caviar,  pancake and vodka. Other than that, I am a novice.

To my surprise, cuisines from its neighbouring countries are abundant in Moscow and they are really popular. I would have never imagined that I would be trying cuisines from Uzbekistan, Georgia and Ukraine. We were really lucky as Steve is very much into his food. I could tell that he loves food, eating or cooking. Another foodie, so to say! He did ask Arnaud what we planned to do, I think Arnaud had mentioned the foodie part in me! When we travel to places, learning a country’s culture through its food is always a highlight!

We first tried Uzbek cuisine. The name of the restaurant is Ходжа Насреддин в Хиве. Unfortunately, I don’t know the name in English, but Steve managed to send me a link (in Russian) of the restaurant. The menu is pretty huge, with a long list of dishes to choose from. It has English translation, but some have bizarre names, sometimes, you just have to guess and use your imagination. If not sure, just pass. If curious, just order. 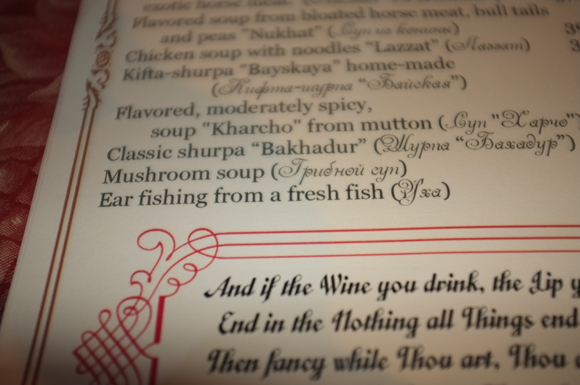 Luckily enough, Steve ordered many small and delicious dishes. The freshly made bread was absolutely delicious – fluffy inside and a slight crispy crust outside, fragrant by some sesame seeds. I also love the vegetables dish that consisted of grilled aubergine and sauerkraut. Even before the dishes arrived, we had vodka, yes neat! 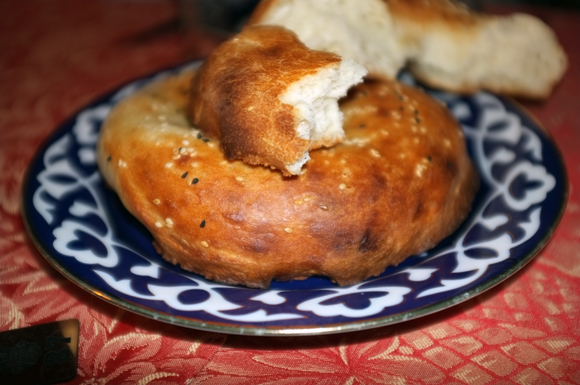 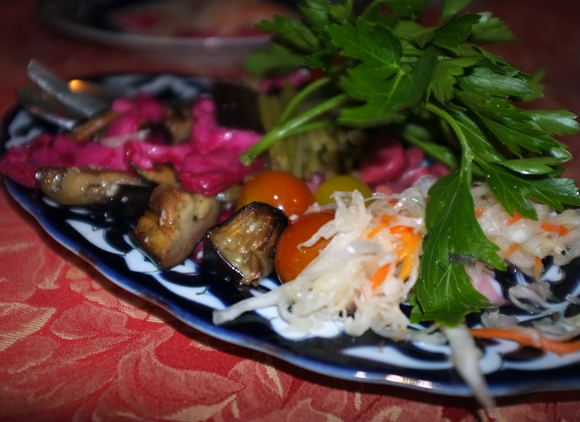 I have 2 favourites. One of them is kebab! It’s probably the best kebab that I have ever had in my life! I am not a big fan of kebab but this time in Moscow, at an Uzbek restaurant, it changed my view on kebab, totally! Look at those slightly charred surface of the meat skewers, they looked just like ordinary kebab but the taste and texture were amazing! I particularly love the chicken one, it has crispy outer layer and the flesh was so moist and not dry one bit! The taste was not overpowered by the marinate or spices. Just right! Plov, is Uzbek-style Pilaf rice. The rice is fragrant by spices and very well cooked. The meat was lamb, very succulent!! I wish I had more! 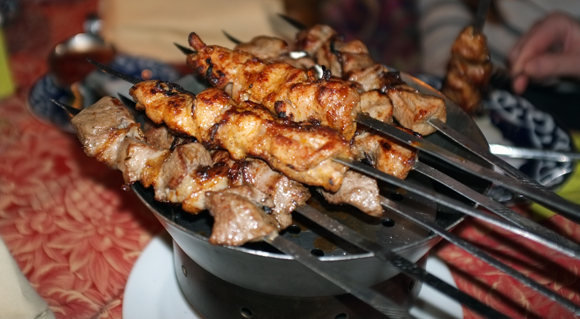 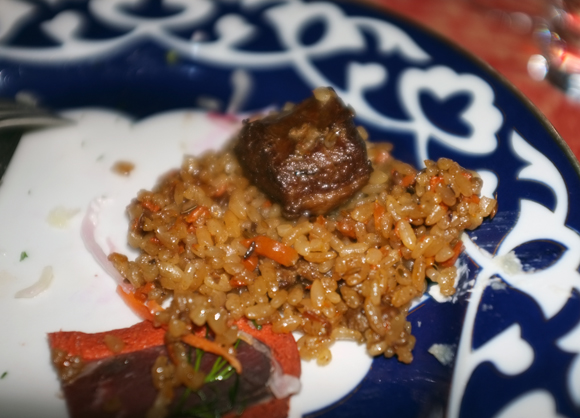 We love the Red Square. I particularly love St. Basil’s Cathedral, the iconic building that I recognise. Being able to see it in real is just wonderful! Kazan Cathedral has really nice architecture too! 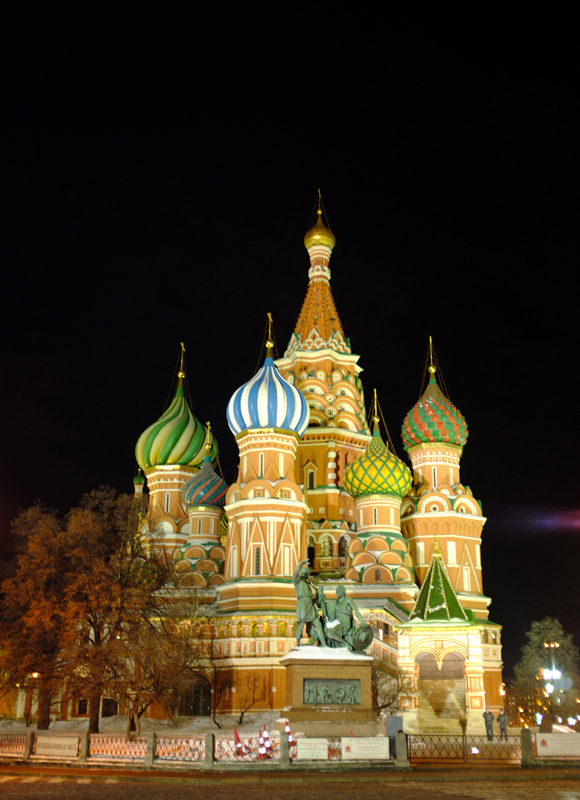 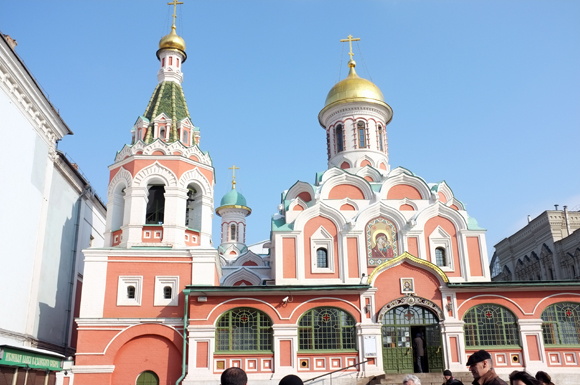 During our stay there, though it was really cold (the kind of cold that I have never experienced before, between -5°C and -15°C!), it was dry and sunny. So, we were really lucky! One day, we went All Russian Exibition Centre. 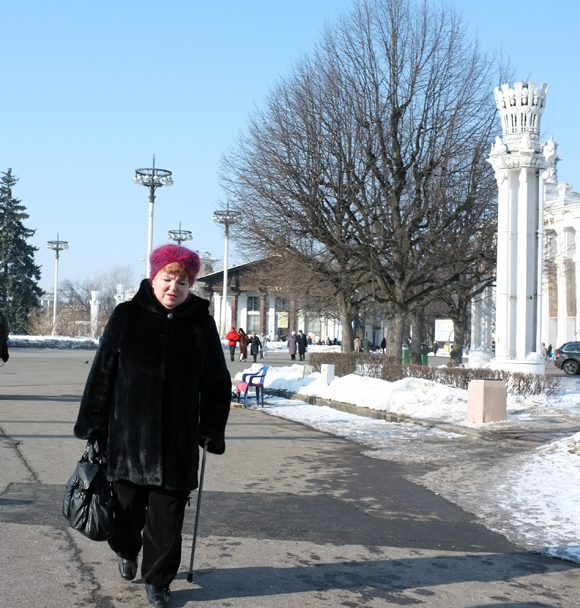 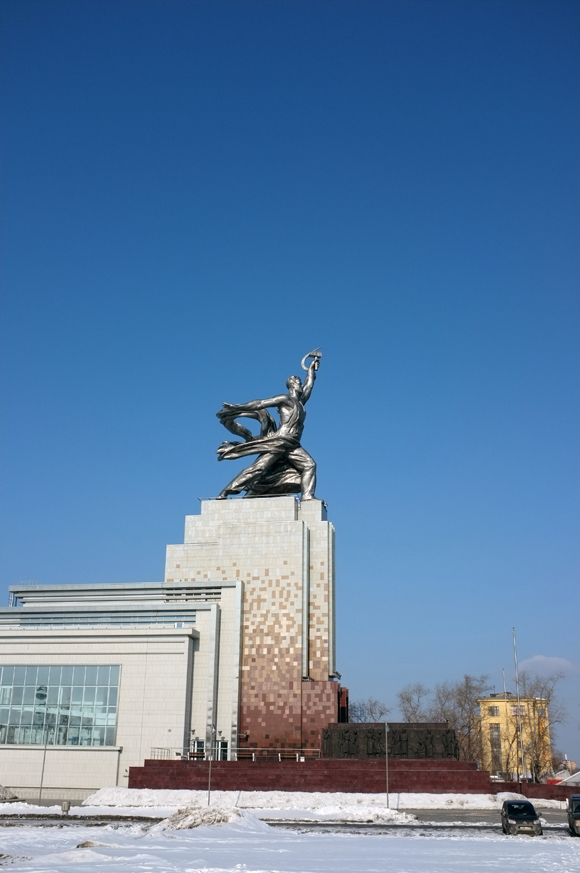 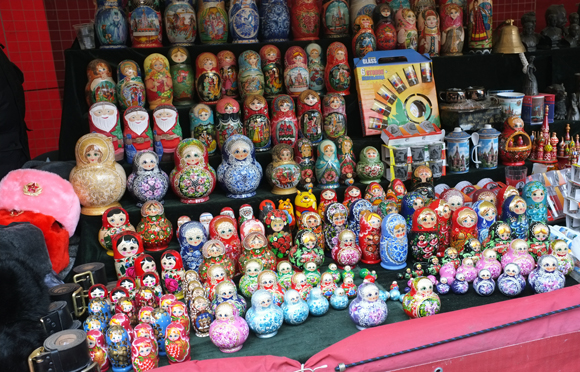 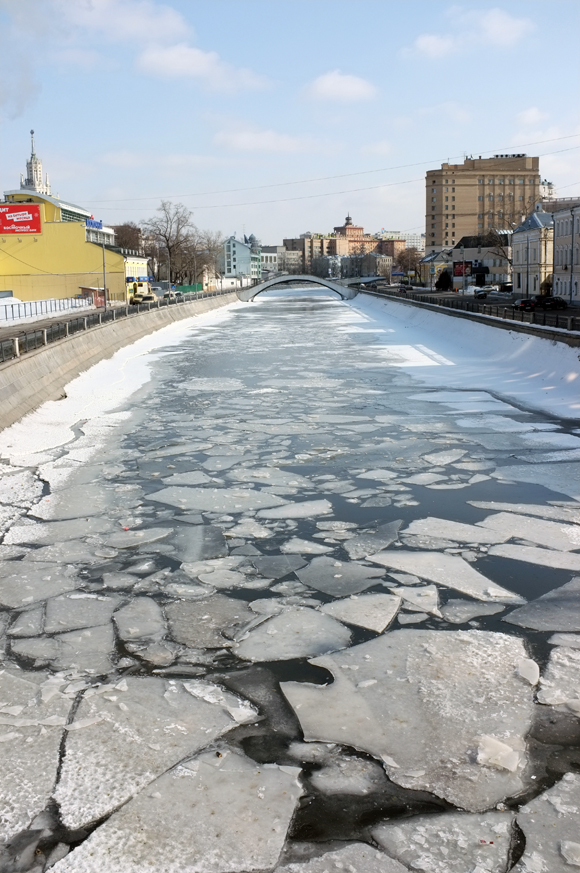 We went into one of the exhibition centres without much intention but it was where we discovered the most interesting thing throughout the trip! Quite a lot of stalls were set up and they sold mainly food related stuff. Some were for clothings and souvenirs. A few stall owners were selling honey. They have so many varieties, with different textures, tastes and colours! We went honey tasting frenzy and bought some of course! I particularly love the one with lavender taste! 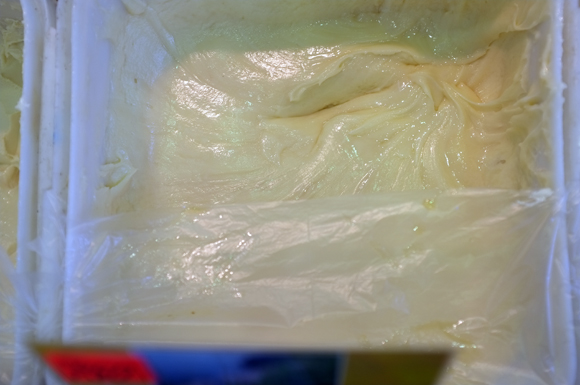 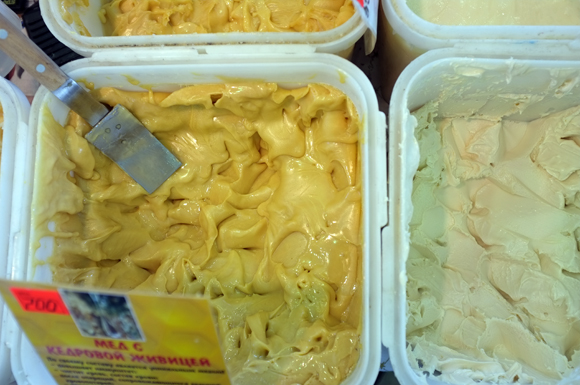 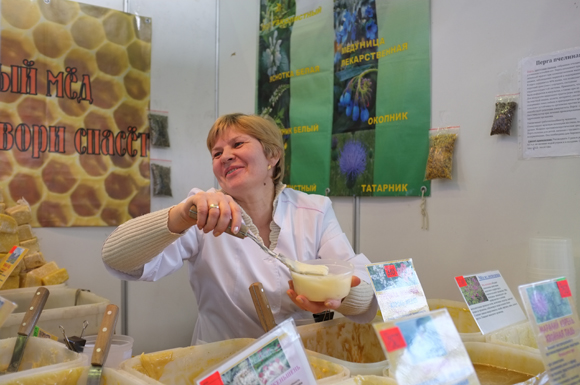 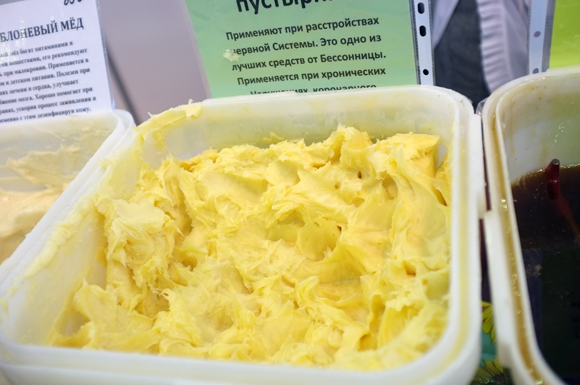 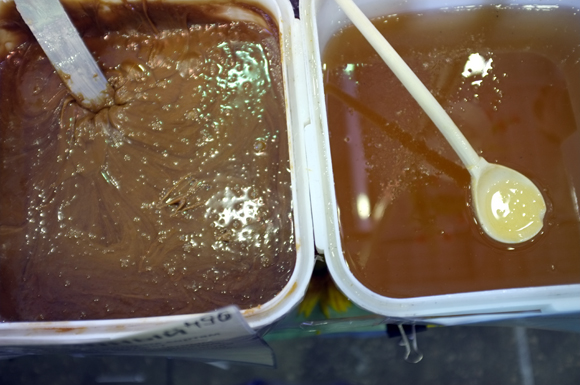 Ukrainian food was another cuisine that we tried while we were in Moscow. We went to Tarasbulba. I love Borscht, a soup that is made with beetroot. Other ingredients like tomatoes and onions are used, I believe. I think it’s a perfect soup for all seasons. One of the dishes that didn’t appeal to me was pork fat. Yes, slices of pork fat. It just didn’t taste nice. I don’t mind pork crackling though. The meat dumplings ‘pelmeni’ served with sour cream were absolutely delicious! 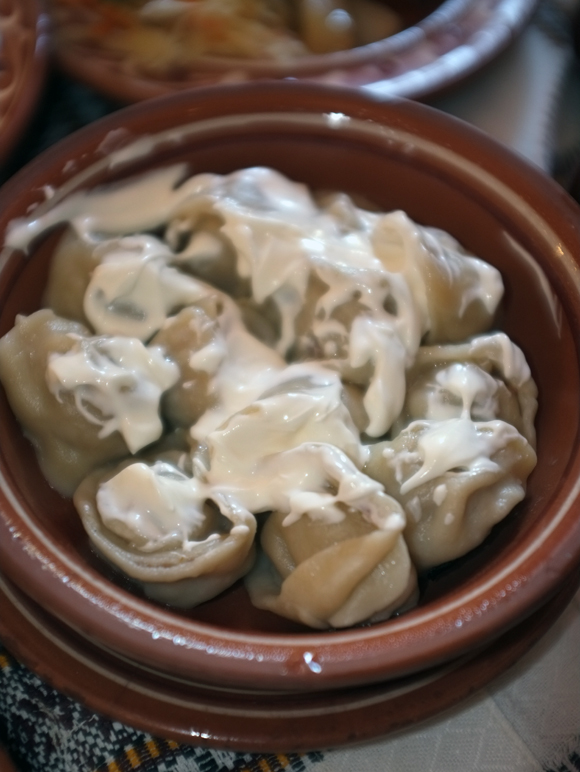 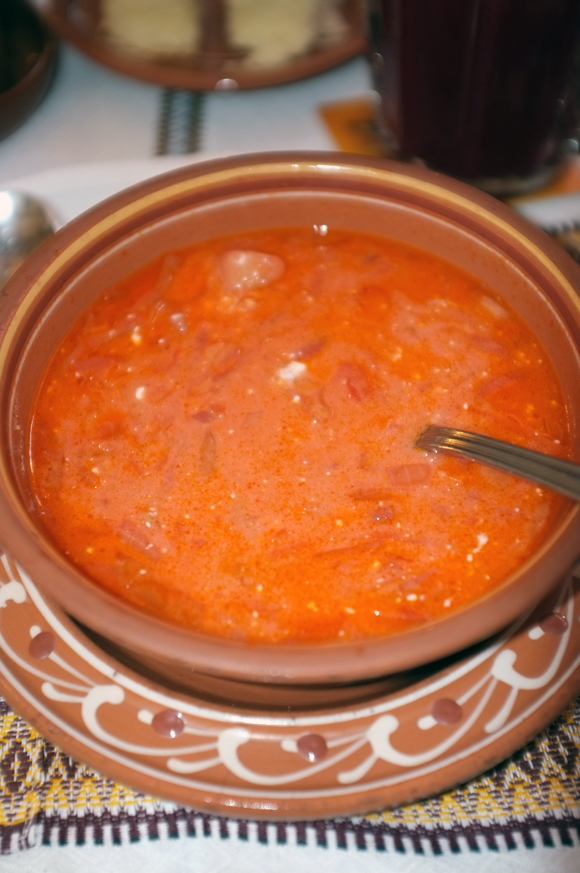 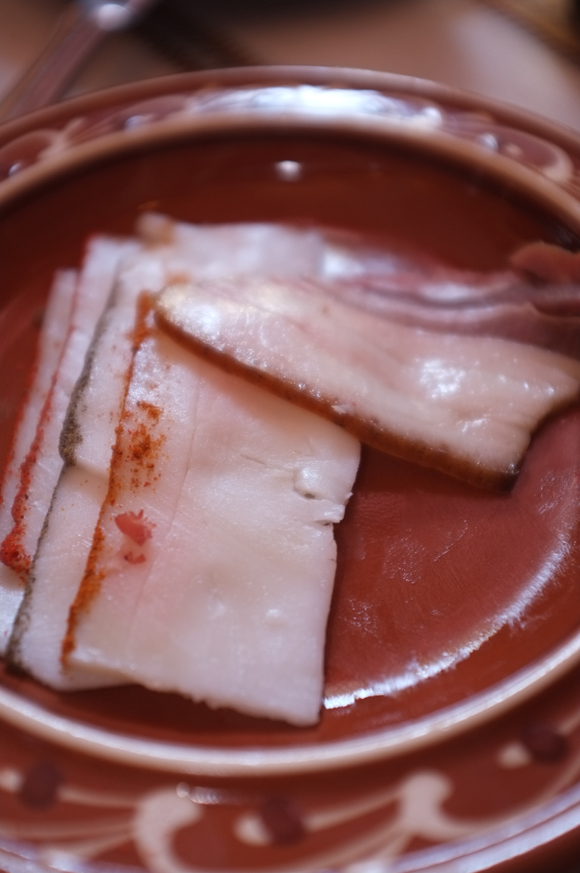 Georgian food, has to be another favourite of mine. We went to Hinkalnaya Horosho Sidim. We ordered Khinkali – Georgian-style of dumpling, which the idea is pretty similar to “Shanghai Siao Long Bao”. However, Khinkali is pretty big. The filling is meat. Yummy! Adzhapsandal, I would say the Georgian-style of Ratatouille was really a great dish. It was served at room temperature, a very simple dish but full of flavour. Khachapuri, Georgian cheese bread, almost pizza-like, was lovely and delicious. I love the one with an egg in the middle, just super yummy! 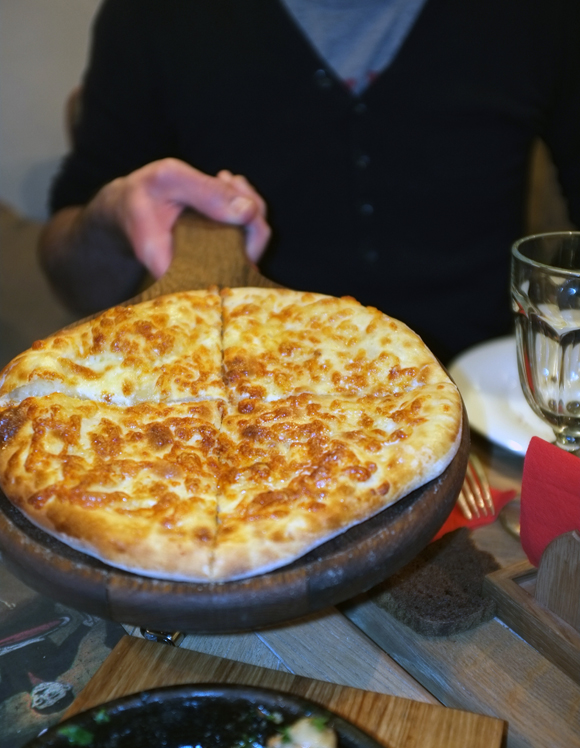 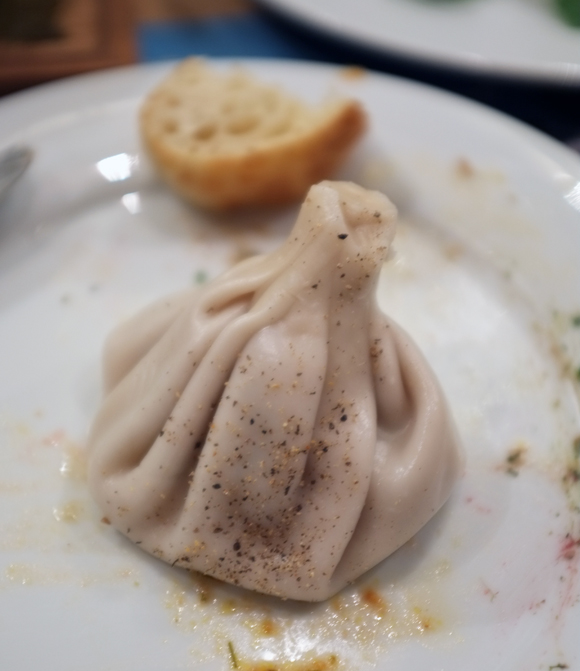 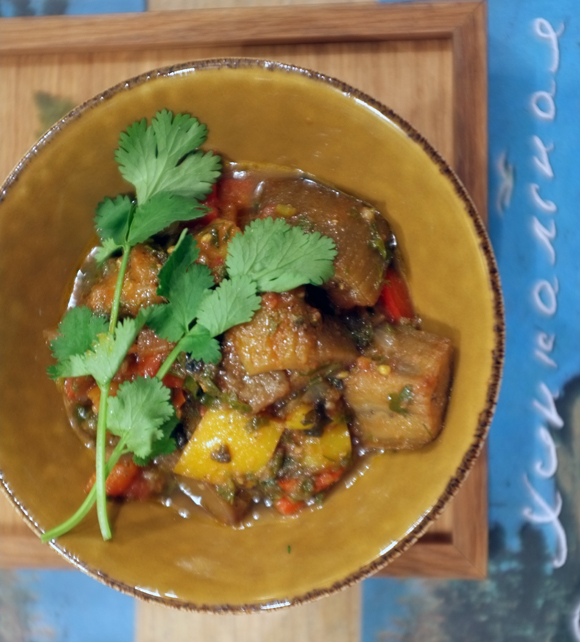 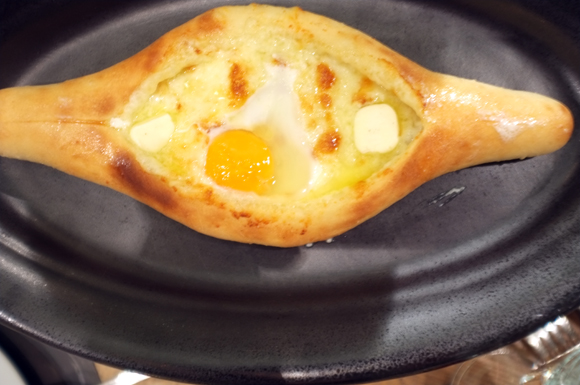 Oh, Cafe Pushkin. A more upmarket place for meal. We went there for brunch and it was excellent! I had red caviar (those shiny little jewels!!) with Russian pancakes, just absolutely delicious. Arnaud had grilled salmon, perfectly cooked. Served with poached egg with hollandaise sauce and pancake. It was scrumptious! 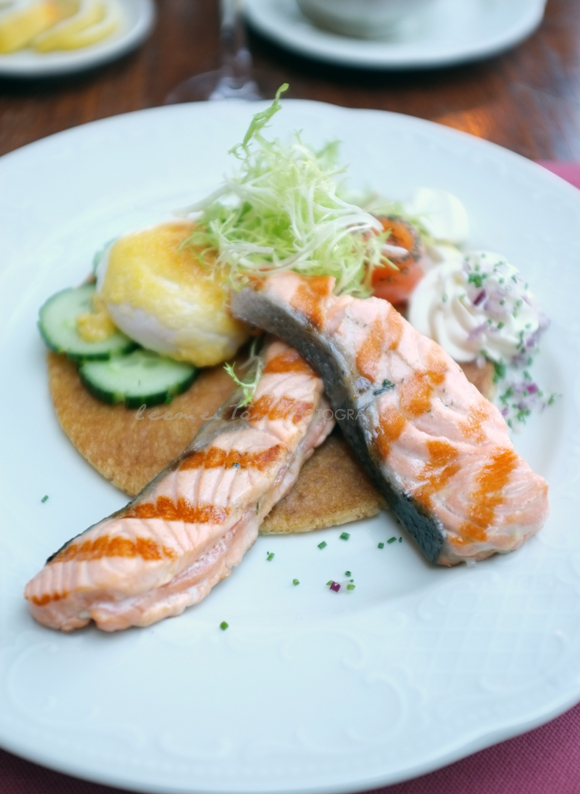 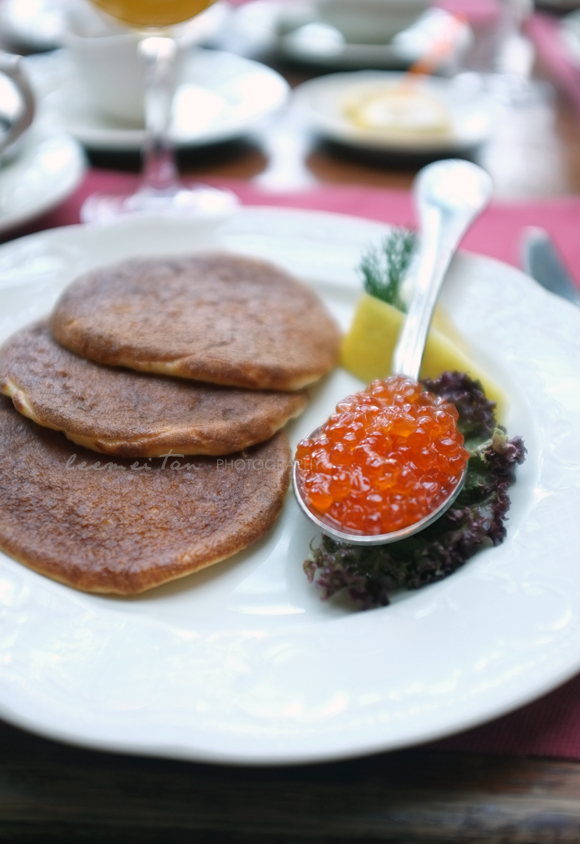 Overall, the trip to Moscow was really exciting! Not only did I try all the different cuisines, I saw this interesting city with my own eyes. The metro stations are all really pretty, the interiors are amazingly beautiful! On the last day before we left, it snowed and it was grey. So, we were pretty lucky for most of the days when we were there as the weather was great with blue sky and dry. I hope to one day discover St. Petersburg! 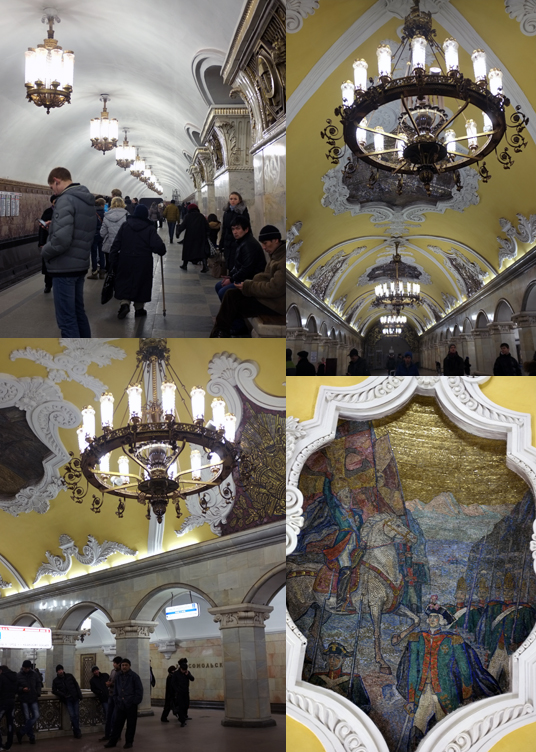