Everything is back to normal now. We are back from Morocco. And it is time to get my blog updated with all the interesting experiences of our short 5 days stay in Morocco.

Arrival in Marrakech.……….Left work early to go back and get our baggages before heading to Victoria Station then to Gatwick Airport. It was quite worrying to see a bit of snowfall when we were at the airport. We were praying that the snow wouldn’t stay and that the flight would be as per schedule. The snow stopped 10 minutes after, which was a relief!

The 3-hour flight with Royal Air Maroc finally landed us at Ménara International Airport, local time was past midnight. It was quite an overwhelming sensation and sight for me when I was checking out the surroundings on our way to the Riad (Wikipedia: A Riad, is a traditional Moroccan house or palace with an interior garden.) It seems to me that this city is non-existence – the buildings, the scenery, the environment and the people. It looks more like a film set to me. But, it is real that I have to believe that I was in Marrakech.

The driver stopped us at Djemma el Fna and we were met by a guy with a charette who then led us to our riad – Riad Azzar, which is in the Médina. We walked through the alleyways, passed the souks that were shut during this time. Some people were still in the streets and it wasn’t quite a safe feeling if we were on our own without knowing where exactly we were heading to. 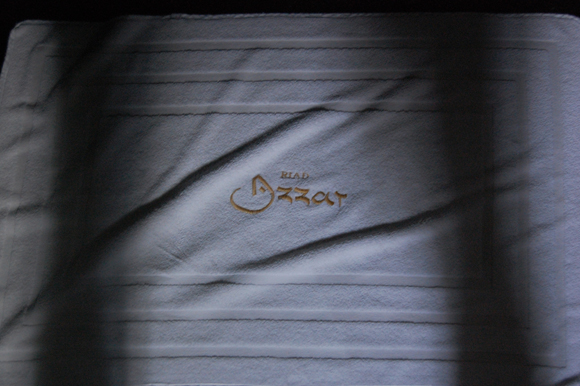 I could feel the tranquillity when I stepped in Riad Azzar. The riad was nicely lit up with Moroccan traditional lanterns, which made a calm and romantic ambience. The night guard guided us to our suite. Every little step was filled with excitement and anticipation.

The room looks exactly like what we saw in the pictures. It’s nicely decorated, very charming! We both felt quite tired after all the travel and the amazement along the way. So, it was time to hit the sack and with much anticipation for the following day.

Chirping of the birds woke me up instead of the bustling vehicles. Sense of tranquillity immediately kicked in and I just felt like taking my time before getting the adventure started in Marrakech. 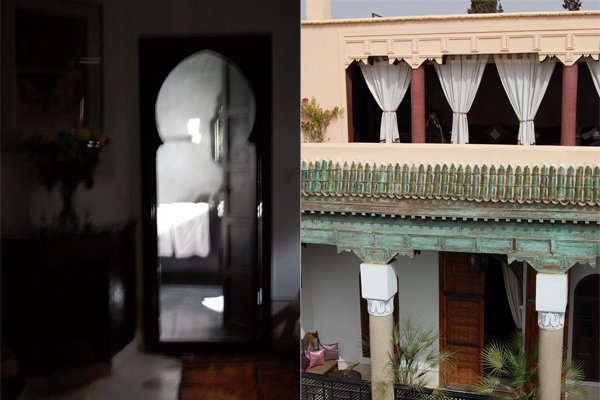 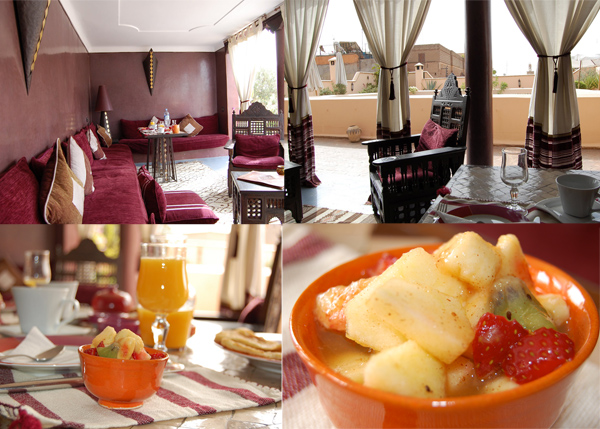 Walking through the Souks in the morning was totally different from the night – lively yet messy. Motorbikes, bicycles and carriages could come at any directions. Pedestrians do not have much priority on the street over here. Honking of vehicles and streaming noises were probably the highlights.

There were so many things to see at the Souks. However, the only irritating point of being in the Souks is that once they spot you being a non-local, they would try their best to persuade you to buy something. I read on the internet I should know this: ‘Non, merci.’ on my fingertips if I don’t wish to buy. It worked but some of them just ignored hearing this after a while.

At one point at the square, a Moroccan woman came to ask if I want to have henna applied on my hand. I said ‘Non, merci’. She didn’t seem to care about it but stared to have the henna applied on my hand with a flowery design. I tried to free my hand but she was holding my hand with force that it seemed impossible. After a few attempts, I managed to get my hand off hers. It was done halfway, she demanded for money. I offered her a few Dirhams and she was put off by it. She demanded for more! We explained that we didn’t have any more money. I could see the dissatisfaction and frustration. We walked away after that and I was fuming. I wiped away the henna, cursing….

My impression of the local people plunged dramatically, which made me question whether they are all the same. They don’t robe you, but indirectly, they do!

We went to Cafe de France for mint tea to cool down and to have a break. Over here, you get a very nice view of Djemma el Fna. It is very breathtaking while sipping mint tea. 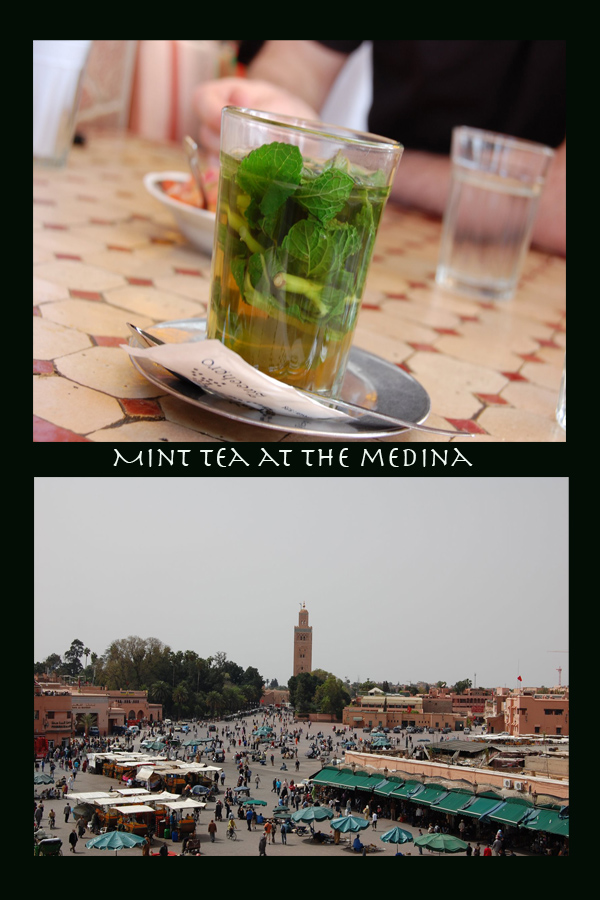 Lunching at the nearby restaurant, called Chez Chergrouni was nice during a sunny day like this. The temperature was about 25 Celsius. We started with a fresh Moroccan salad, then Tagine and of course not to give mint tea a miss! So, it was my first Tagine! I had Chicken with Lemon Tagine. It was very delicious I have to say (but this experience of good Tagine didn’t last long after a few other better ones took over!).

More souks in the afternoon and a visit to theMarrakech Museum. I was really impressed with the Islamic design and architecture. 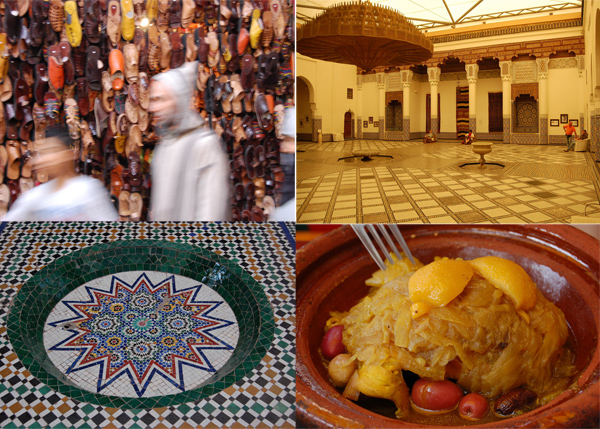 The night fell at about 19:00 hours. Djemma el Fna is a place where it changes its face as the dusk approaches. Some acrobats, fortune tellers, and potion traders can be seen. Furthermore, more than 40 food stalls selling Moroccan specialties i.e. skewers, tagine, grilled seafood & meat, soup, snails and sheep’s head can be found within the square. The stalls are all lit up and turn the square into a liveliest nightspot all year round! 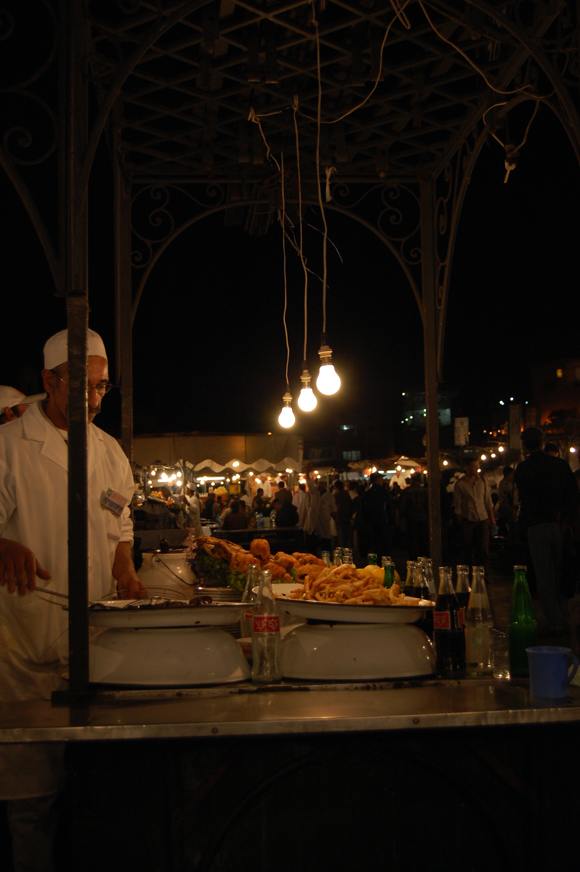 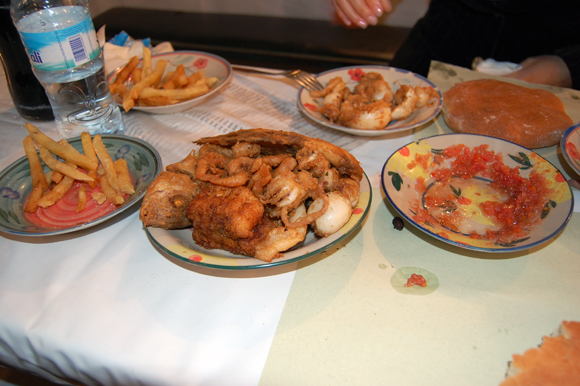 We wanted to give the street food a try and my first thought was I would have to choose from so many stalls, which could take a while. I was wrong. They sell the same thing, that’s why the competition was so heat! Forget about having a stroll pass every stall and decide which one to go for. You would never get this priviledge. For all the stalls that we walked pass, we were asked to sit down and have their food and they were better than others. You would never get to choose, they choose for you!

We left Riad Azzar to go to Essaouira. It is coastal town, which is about 3 hours away from Marrakech. Luckily we managed to get a coach (Supratour) ticket the night before. It was also a last minute booking for Riad Mimouna.On the way to Essaouira, we passed a few little towns and villages. The sights of abundant dry lands (not quite desert) and also the Atlas mountain were picturesque. We had a pit stop halfway through the journey.

The view of Essaouira was amazing at the first sight, that was when the bus went downhill which allowed us to have our first glimpse of the town. We got off the bus and got the ‘charette’ guy to lead us to the Riad. It was so windy that made it difficult to walk forward! On the way to our Riad, we could hear the waves splashing on the rocks and strong gust of wind, it was like a massive storm! At one point, while passing through an alley, the water splashed passed a high wall barrier that gave us a shock! 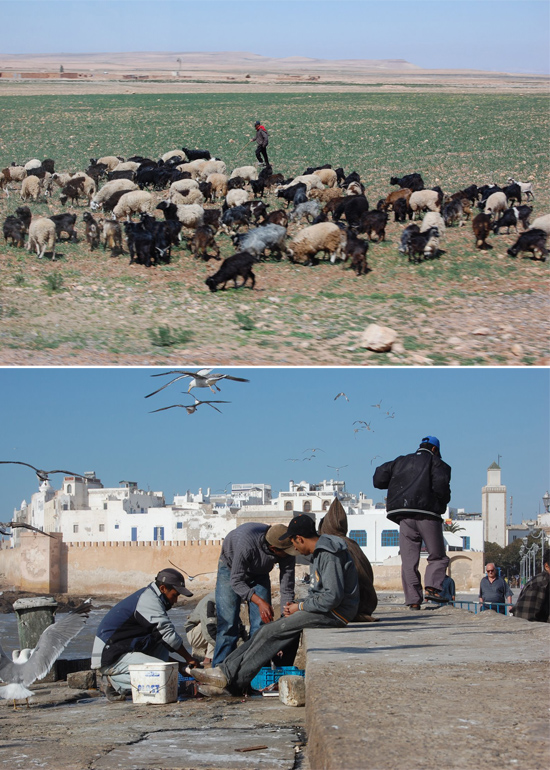 Riad Mimounais nicely located, by the sea. A few minutes away from the Médina, you could enjoy fresh seafood of your choice served in the BBQ way. A selection of cafés and shops can always be seen. I have to admit that the environment in Essaouira was totally different from Marrakech. It’s more relaxing and Souks were not in such chaos. Interesting part of the day approached. It’s time for dinner! We went to Restaurant Ferdaous, recommended in the Lonely Planet. Great starters – baked stuffed vegetables, green pepper and tomato salad. As for the mains – Fish Tagine & 7 vegetable couscous and they were delicious! Not to forget, the bread. They were freshly baked specially for the restaurant just next door. Best ever I have tasted!