I couldn’t concentrate. I kept looking at my watch. The time seemed to have stopped. “Was my watch dead?” I countered check with the time shown on the bottom right of the (horrible) PC (that runs on Windows XP) and it confirmed that the time was right. So, it was just me being very impatient to get out of this cage to seek my freedom.

I felt that I had been granted with a new lease of life the moment I stepped out from the office building. It was still very windy but that didn’t bother me. I fought against the wind bravely as I sped up my heavy footsteps.

To avoid being ripped off big time by the so-called ‘world-class’ Heathrow Express from Paddington to Heathrow, we opted for a less expensive option by taking the Underground all the way (Zone 1 to Zone 5/6) to Heathrow T1. That saved a lot even though the journey is longer.

You might agree with me that public transportation in the UK is such a shambles compared to its neighbouring countries, for e.g. France. It seems that the transportation system here is still in its 19th Centuries and not 21st. The recent chaos at T5 Heathrow proves the ‘success’ of the transportation in this country! Would they be in the position to have the High Speed trains like those run in France (TGV)?

We touched down at Dubai International Airport early in the morning (local time) for our connecting flight to (you guess where)….. Kuala Lumpur, Malaysia! The long awaited moment was finally here. We were happy but tired. We had not adjusted to the change of the time zone. Even so, we had to fuel our bodies with some ‘decent food’ as we had another 3 hours to kill at the airport.

The seat-belt sign was on. All the cabin crews were asked to get ready for landing. I was getting excited as I took a bird-eyes glimpse of the lights on the Malaysian soil.

It took slightly more than 45 minutes by taxi to get to the central of KL. The view of the Petronas Twin Towers from far was magnificent. With the KL Tower not far from the Twin Towers made it even a better skyline. 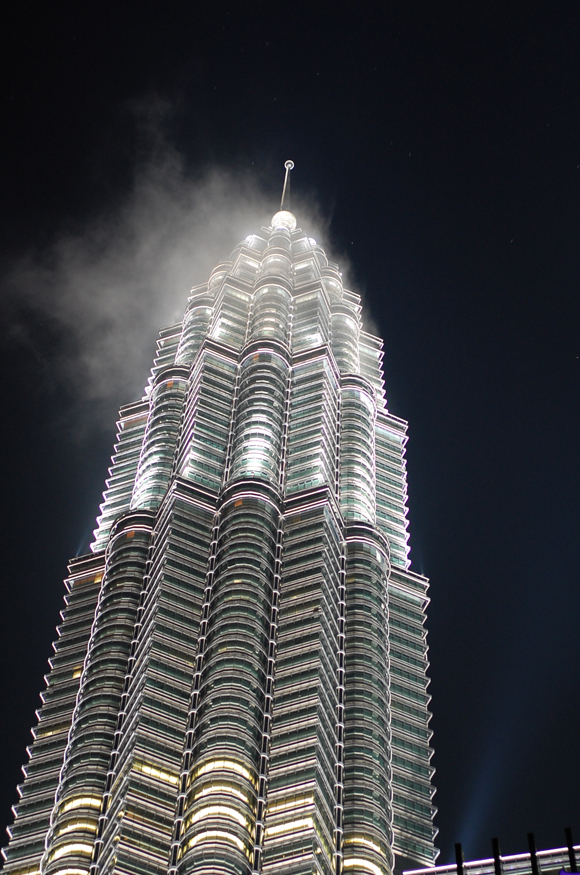 We were greeted by the warm and friendly staff at the Westin. The check-in process was rather smooth. Soon after that, we were led to our Heavenly Bed® room with Twin Towers’ view. Hang on, where were the towers? I couldn’t see them! There were some constructions going on and I was told that they were for the service apartments at the Pavillion KL, a new shopping complex. (My view – it’s great for window shopping only as all the imported designer items tend to be more expensive in Malaysia.)

We rang the Concierge and insisted to have the room that was described as per our booking. Westin top-class service didn’t disappoint us. Looking at the fact that we were really tired and our tempers could run short. We were soon changed to a room, just a few floors higher at the executive level with a guaranteed Twin Towers’ view. Yes, they were just right there, beaming with silver lights. What an amazing night view!

I adore the modern and sleek design adopted by the Westin. A big enough LCD TV on the wall just in front of the bed. A long and warm shower gave me a great relief after the long haul flight. It didn’t take me long to go into my dreamland after seconds lying in the Heavenly Bed® (it’s no joke that it was heavenly comfortable!) 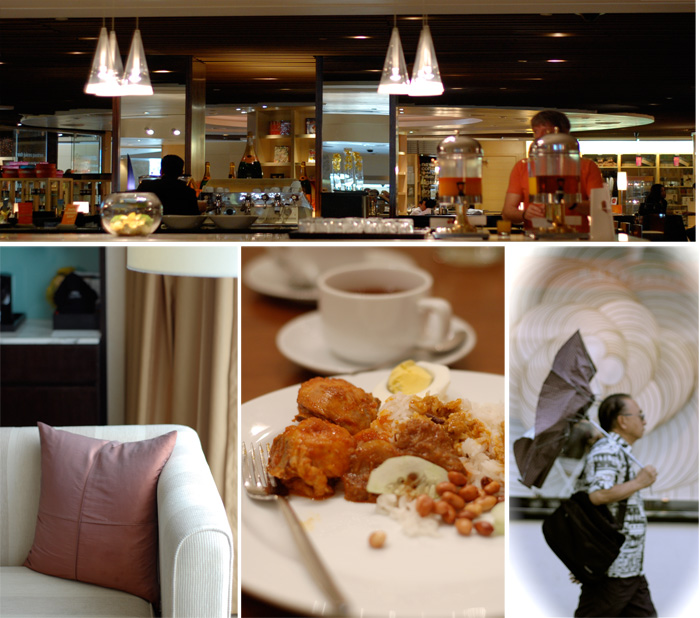 What would be better than being spoiled for great selections of breakfast first thing in the morning and to be treated like a king or queen? If English, American and Continental breakfast aren’t your cup of tea, fear not, you wouldn’t have to starve as there are other choices for you.

At the Westin, take a stroll before you decide what you’d like to start your day with. Apart from the above mentioned choices, they offer Japanese, Malaysian, Indian, and Chinese breakfast. Like I said, you’ll be spoilt for choices! If you like pastries, you have come to the right place, they have a different section just for that – anything from Croissants to Danish selections. 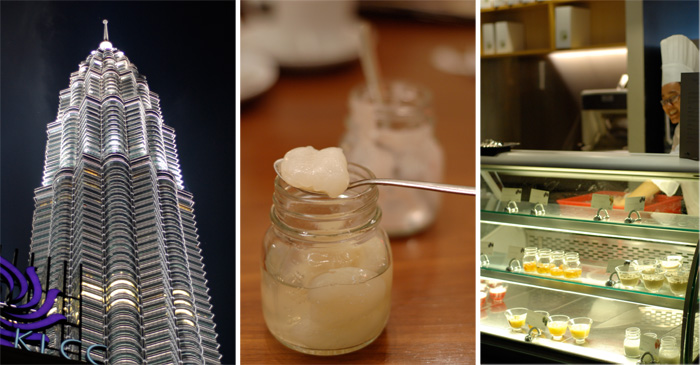 So, what about me? Ah, I had the National dish – Nasi Lemak! Well, I stopped my usual toasts and cereals consumption while there were better choices! I dished my own Nasi Lemak – coconut rice (of course), chicken curry, toasted peanuts, boiled egg, deep fried anchovies and some sambal. Ah, something extra, fish curry. I didn’t give Prawn noodles/Hokkien Mee a miss too! I had some Danish pastries… and yoghurt… I stuffed myself with a very heavy breakfast! It sounded more like a 3-course meal! Well, I had sampling portions so that went down just right as brunch!

The free tickets for Twin Towers Sky Bridge were all given out by the time we reached, what a shame. I haven’t been on the Sky Bridge before even though I used to work right next door! Since we were at Suria KLCC shopping complex, we shopped there for a bit before proceeding to our next stop. 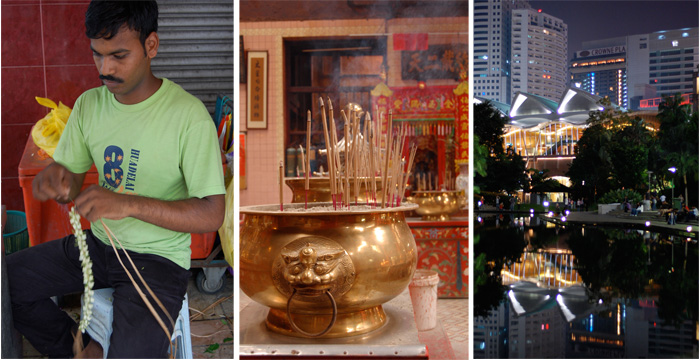 To check out the typical side of KL, take a Chinatown walk. This guarantees you a quick win of the multicultural sight in Malaysia. Hopped on to the RapidKL from KLCC and hopped off at Masjid Jamek. There are lots of Indian restaurants around this area where you could find decent and authentic Southern-Indian food. We passed by a Taoist temple in an alleyway called Sze Yah Temple before we came to Central Market – a centrer for arts and crafts. Worth a visit if it was your first time to KL.

For home deco fans like me, don’t miss Peter Hoe – Evolution & Beyond at Lee Rubber Building. I wish I could buy those items that I saw there, unfortunately they were too bulky to be carried. We reached our final point of the walk at Jalan Petaling, Chinatown, that is ever so famous for its counterfeit. I don’t encourage anyone purchasing counterfeit products no matter how real some could look.

As the dusk approached, we decided to have sushi for dinner and take the last majestic glimpse of the like-diamond-coated Twin Towers at the KLCC Park. Then, a long stroll back to the hotel taking the Jalan P.Ramlee route – where all the bars and night spots are, gave a slight idea of the nightlife in the city. We called it a night after a day that was loaded with excitements.