It is amazing how food blogging has changed my life – my passion in cooking grows everyday (as well as eating!); it has also made it possible and easier to get to know like-minded people from different parts of the world. When I first started blogging, I appeared to be shy and anxious about getting to know people that I have never met, merely just saying hello and sometimes not knowing their real names but just the names of their blogs. As times passes by, I am getting used to the vibes and the online social culture, Naturally, I am more relax, open-minded and confident in making more friends in this wonderful world of food. A close tie has formed amongst us. We catch up frequently on social networking sites, such as Twitter and Facebook. We talked about food and almost anything! It brings a lot of laughter to my life and I truly appreciate the accompaniment that I get throughout.

Every week, I make sure that I check those blogs that I follow at least once if not twice (provided I am not on holiday). I want to get myself updated with what’s going on, food inspirations, photos of food/objects/places that my fellow bloggers have to offer. You may be familiar with one of my favourite bloggers, Rosa, an Anglo-Swiss that has a yummy and beautifully written blog called Rosa’s Yummy Yums. She has great eyes for photography and her posts are always very well-written and evocative.

One day, I approached Rosa to see if she would be interested to write a guest post for my blog. She agreed to my proposal and that was a true excitement for me! Due to Rosa’s busy schedule, we managed to fix a good day in the summer month to feature her photos and article. I am so happy to inform you all that we are really lucky to have Rosa with us today. Please welcome Rosa!

When it comes to the blogging world I am a very social animal who’s inhibitions disappear as soon as I am connected to the internet. It is always a immense joy for me to make new online friends (who sometimes become pals in reality) and to discover their exciting universe as well as to exchange ideas with other like-minded bloggers, so when the sweet Leemei at “My Cooking Hut” kindly asked me to guest post for her enchanting blog I was thrilled to bits. I really adore this Malaysian native’s delightful site, tempting multi-ethnic recipes and lovely minimalist photography. In one word, her work is awesome! Needless to say that I would never have had the heart or desire to turn down her offer for I consider it an honor and a wonderful opportunity to be featured in her space. A thousand thanks for thinking of me and letting me express myself on your platform! As for you readers, I hope you’ll have as much fun reading this article as I had composing it. 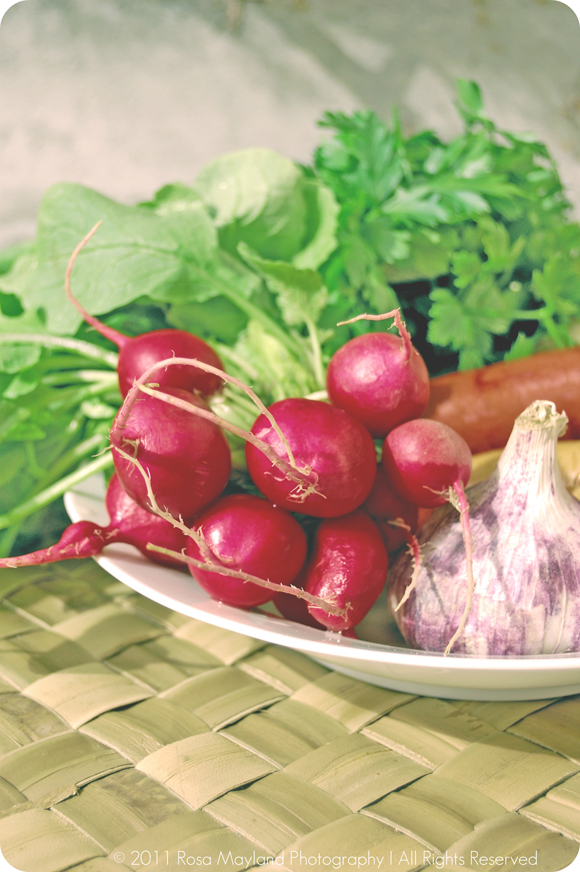 Being a terrible perfectionist coupled with a procrastinator, it is in my nature to hold my hosts in great respect and to follow the adage “better late than never”. That is the reason why it took me a few months to finally come up with an interesting idea that would make Leemei proud and not regret inviting me to write for her. Anyway, once I finally found the right subject to expose here, I got caught up with burning enthusiasm and within a couple of hours my Word pages got filled with my mind’s mad scribblings.

Considering the fact that the Swiss National Day is just around the corner, I thought that it would be the appropriate moment of the year to share with you a traditional and summery recipe from my country as there is no better way to feel close to your roots than by cooking the foods that are a part of your identity.

The date marks the death of the first German Emperor from the house of the Habsburg, the independence of Switzerland from the Austrian rulers, the alliance of the rural communes Schwytz, Uri and Unterwalden (central Alps) to protect themselves against outside aggressors or anyone attempting to subject them and the creation of the Federal Charter of 1291, a pact which ensured free trade and peace on the important mountain merchant routes.

Our “Fête nationale Suisse” (or “Schweizer Bundesfeier” in German, “Fiesta Nazionale Svizzera” in Italian, “Fasta Naziunala Svizra” in Romantsch) takes place on the 1st of August which is considered a Sunday. It is a very fun and relaxing, yet solemn day during which you’ll find no flamboyant parades, pompous speeches nor individuals going berserkers. It all stays highly simple, well-organized and humble, exactly like the inhabitants of this unique land (apart from a small number of idiots who like to riot). Each municipality and locality is embellished with old-style patriotic decorations (flags) and organizes small celebrations where all kinds of activities take place: convivial feasting, austere elocutions adressed by politicians at all levels (from Federal coucillors to the heads of communes), cheerful music (both popular/folk and modern, not forgetting the incontrovertible national anthem), joyful firework displays (both private and communal) and impressive bonfires (the news of the expulsion of foreign bailiffs in the 14th century and in old times, information in general were spread in this manner). Then, on a larger scale, in Schaffhausen the 25 meters high Rhein Falls are illuminated, on the Rütli meadow (on Lake Lucern in Uri) the legendary oath (Rütlischwur) is re-enacted in order to commemorate the Old Swiss Confederacy and a radio as well as television broadcast by the President of the Swiss Confederation is aired.

Besides those entertainments, for most people the 1st of August festivities would not be complete without picnics in the countryside, barbecues in the garden or brunches on the farm that bring together producers and consumers (a new tradition – some 450 farms across the land serve up Swiss-style breakfasts banquets where terroir products are plentiful). On this occasion, it is not rare to see friends and family gather around a homey meal composed of fresh bread (“Zopf”,braided bread or cross-shaped milk rolls called “Augustweggen”), a vast array of grilled sausages (“Cervelas”, “Schüblig”, “Kalbswurst”, etc…), cheese (au naturel and sliced or melted – “Raclette” or “Fondue”), “Rösti”, dried meats, colourful hard-boiled eggs, homemade jams, “Birchermüsli”, salads (“Cervelas Salad”, lettuce, tomato & mozarella, etc…) or any dish that reminds the colors of our emblem (red and white). 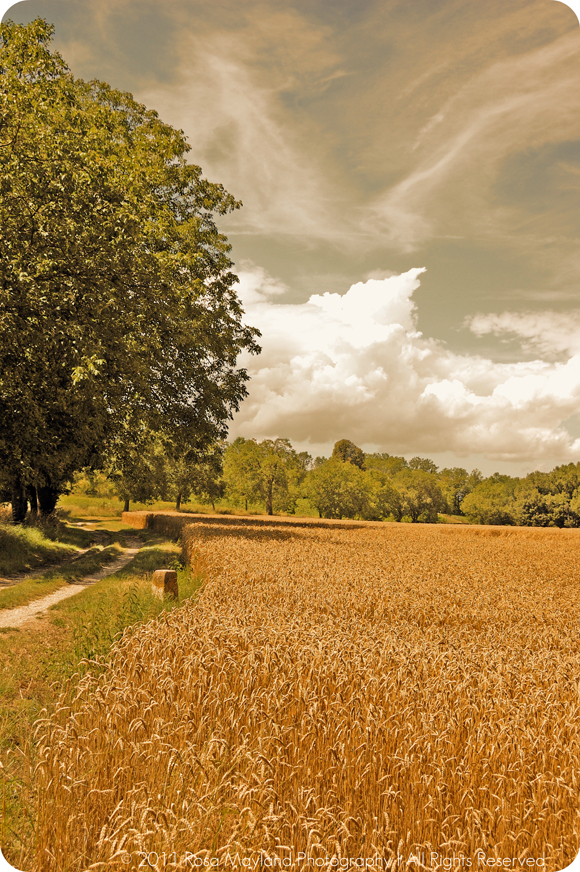 Taking into account that I am very keen on sharing recipes from my heritage, I chose to talk about a Swiss speciality which we treasure for the memories (lunch at the mountain shack, school trips, 1st of August, military service, village or agricultural fairs, family reunions,  etc..) that are closely attached to it. This countryside dish is known under the name of “Cervelas Salad”.

The main ingredients that are required are “Cervelas”, a cooked as well as smoked sausage made of pork rind, beef, bacon and zebu intestines (read  a fun fact about the nation’s battle to save this piece of our patrimony) and “Gruyère” (or “Emmentaler” or “Appenzell”) cheese to which radishes, eggs (sometimes), potatoes (not always), green or normal onions, chives and a vinaigrette/French dressing are added. There is not one fix recipe for it as many variations exist depending on regionality (learn more about that here) and the cook who prepares it. Even the way the different components are cut varies from one chef to another.

“Cervelas Salad” might not be the most gastronomic salad on earth, but if it’s made with quality ingredients then it can be a real delicacy and utterly unforgettable. Besides, it is possible to personalize it and make it a little more gourmet as well as give it a stylish twist. As a matter of fact, one can improvise quite a lot around the basic recipe and that’s exactly what I did.

Instead of only employing “Cervelas”, I also used a “St. Galler Schüblig” sausage. For more taste, I opted for mature “Gruyère” cheese and the addition of fresh garlic. I wanted it to be not excessively complex and I didn’t want to spoil the gorgeous flavor of both the meat and the cheese, therefore I refused to utilize too many elements. And, as this salad is very nutritious and rich in strong aromas, incorporating a mayonnaise-based salad sauce was a big no-no, so vinaigrette was a wise choice.

My “Swiss Sausage Salad” tastes marvelous and is lipsmackingly good, pleasantly aromatic, refined and well-balanced; the flavors mingle together incredibly well. Apart from being mouthwatering, it is also colorful, pretty to look at and can be plated beautifully. An extraordinary main course. Bon Appétit! En Guete! Buon Appetito ! Bun Appetit! 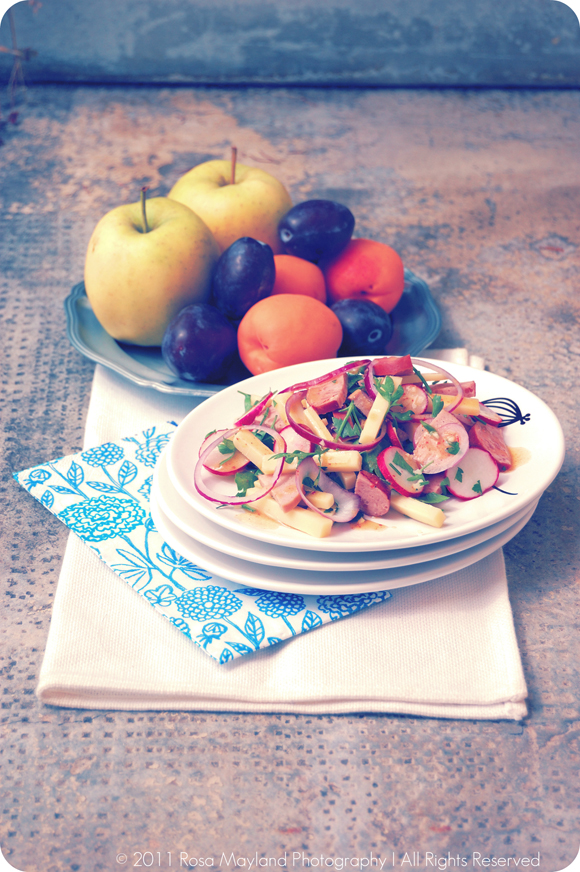 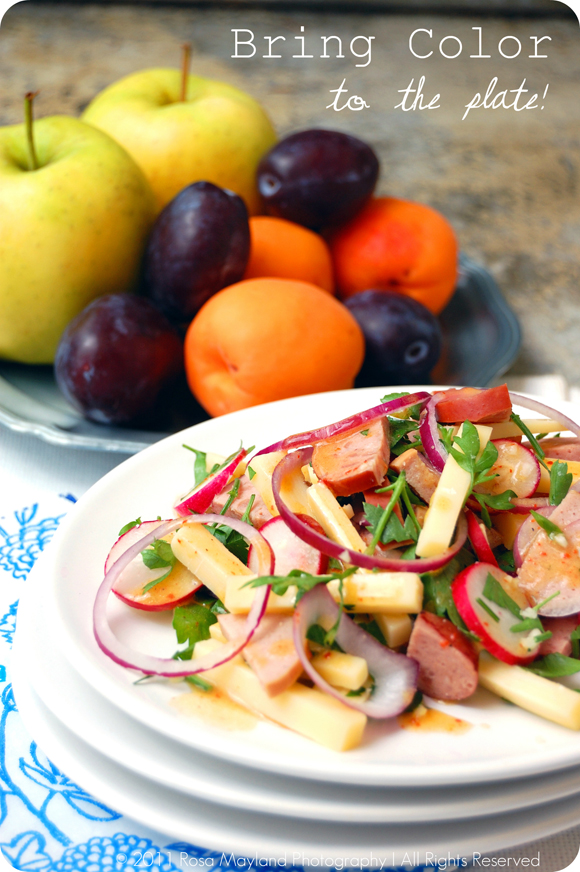 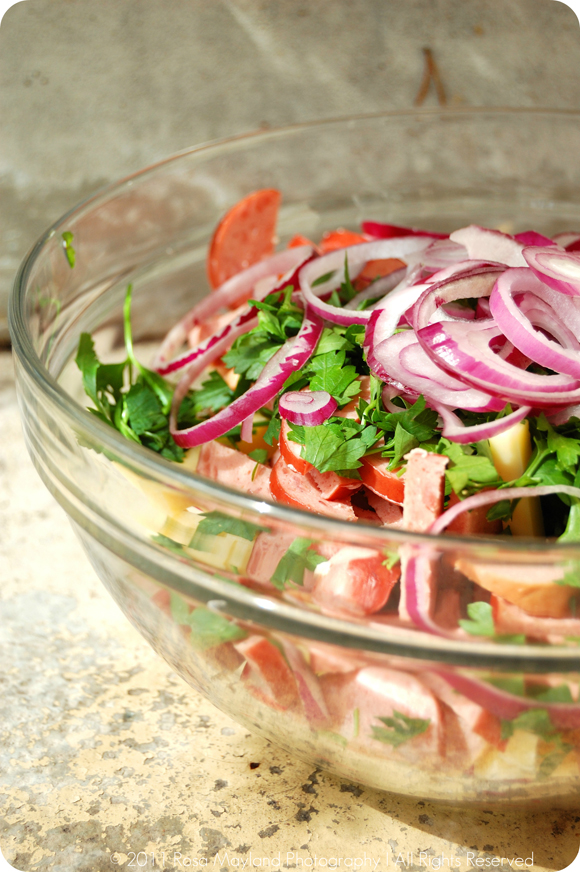 For the Swiss Sausage Salad:

1. In a medium big bowl, mix together all the ingredients for the salad.

Method For The “Vinaigrette”:
2. In a small bowl, whisk all ingredients for the vinaigrette, then add them to the salad and mix delicately.
3. Serve.

Remarks:
If you can’t find “Schüblig” and “Cervelas” sausages, you can replace them with 300g “Mortadella”, cut into thickish slices or chunks, 300g raw “Frankfurters”, “Kielbasa” or “Vienna Sausages”.
You can also use “Espelette Pepper” flakes or any other semi-hot chili flakes in place of the “Turkish Chili Flakes”.
The “Malt Vinegar” and “White Balsamic Vinegar” can be replaced by regular “White Wine Vinegar”.

Serving suggestions:
Serve this salad at room temperature (the cheese and meat should not be cold) and accompany with bread, boiled potatoes or macaroni.