Time really flies! Thought we celebrated Christmas and New Year not too long ago and we are now halfway through January and Chinese New Year is just around the corner. This year is the year of dragon and I hope it will be a better year for everyone!

I had wanted to make some sweets for Chinese New Year but finding time was always an excuse. So, for this year, I really wanted to make some pineapple tarts as a way to welcome the year of dragon. Last year I tried making the pineapple tarts that LK from Food 4 Tots posted on her blog. They were amazingly delicious! So, I made again this year just in time for Chinese New Year.

I advise to make the pineapple jam a night before as it took more than 1 hour to cook and cool. Once the jam is done, you can easily make the pastry from scratch. LK did use a pastry roll press that she told me she bought from a baking supply shop in KL. So, it was quite impossible for me to get one as I am sure I will not find one in the UK. Luckily I asked my mom to find one. She found and bought one for me, it does the same job (pretty much) but it’s made in plastic. I don’t know where exactly she bought it but I took a photo to show what the packaging looks like if you may be interested to find one in Malaysia. 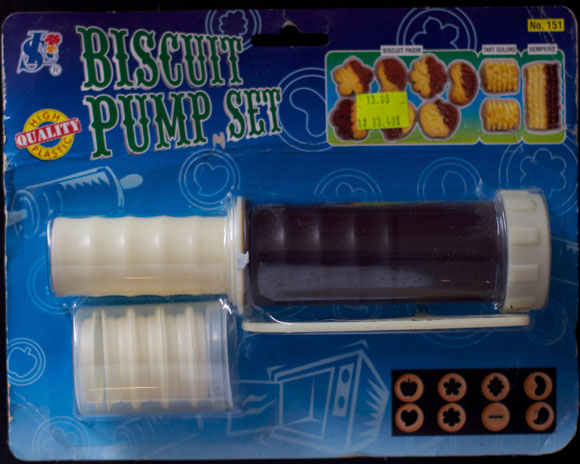 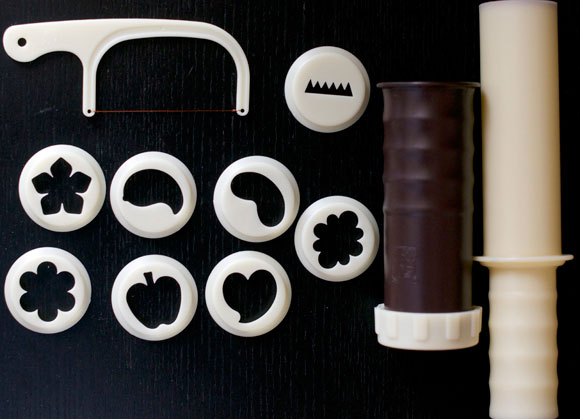 Seriously, these pineapple tarts are really addictive. I baked them on Sunday and there are only a few left! So, I may have to make some more! I hope you will find some time this weekend, perhaps, to try this recipe even if you don’t celebrate Chinese New Year. I think it’s a treat!

For the Pineapple Tarts For Chinese New Year:

1. Skin the pineapple and remove the “eyes”. Cut each pineapple into quarters lengthwise. Grate the pineapple using a grater until it reaches the core. Discard the core.

2. Drain the grated pineapples using a large sieve. Use a ladle to press the juice out until it is 90% dried up. Retain the pineapple juice for cooking later. Use a wooden spoon, cook the grated and drained pineapples, putting in half portion of the sugar, cloves, cinnamon sticks and lemon juice in a large pot under moderate heat until it begins to boil. Reduce the heat to medium and continue to cook, stirring occasionally.

3. Add the pineapple juice little bit by little bit when the juice in the mixture is almost evaporated. Repeat this step until all the juice is completely used up for the cooking. Add the remaining sugar bit by bit until the desired sweetness is achieved. This step can be done close to the end of the cooking.

4. When all the juices are used up and the mixture has started to look dry and caramelized, reduce the heat to low. Keep stirring until the mixture is almost dry and sticky with a golden-hue. This will take about 1-1½ hours. Remove cloves and cinnamon stick. Set aside to cool and store in an air-tight container.

5. Preheat the oven at 160°C. Line a baking tray with grease-proof paper. Meanwhile, cream the butter and the icing sugar until light. Beat in egg yolks, one at a time. Add in salt and beat until fluffy.

6. Fold in sifted ingredients (divided into 2-3 times) and mix into a firm dough. Leave aside for 30 minutes. Put the dough into a pineapple roll pastry press or mould, and then press out into a strip of 5cm length.

7. Place the pineapple filing at one end and roll up the pastry, as in a Swiss roll, enough to enclose the jam. Do not overlap the pastry. Cut off the excess pastry. Put the rolls on the baking tray. Brush with egg wash.

8. Bake in pre-heated oven for 15 minutes and turn the baking tray 180 ° and continue to bake for 2 minutes or until golden brown. Leave to cool before storing.