Macaron (Macaroons) is a round meringue based confectionery that is made with egg whites, icing sugar, ground almond and food colouring. It is always filled with different flavours of buttercream, jam or ganache. The filling is sandwiched between two rounds of meringue.

There has been a big craze over this little sweet thing. When I was in Paris, I could easily see long queue formed in front of Ladurée. It just seems to be a not-to-be-missed when one is in Paris. I did sometimes crave for macarons and willingly joined the long queue.

Ladurée is a classic and popular choice when comes to macarons. 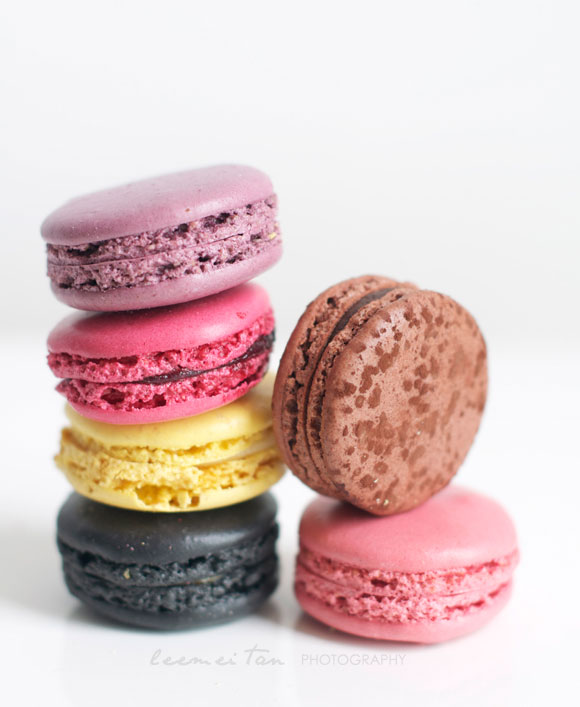 Its competitor, Pierre Hermé is another popular choice amongst the Parisians. Now, I have been thinking (for a long time!) to compare these 2 heavy-weight. The time came when Arnaud returned from Paris with 2 boxes of macarons – one from Ladurée and the other from Pierre Hermé. When I saw them, not only I was excited as I got to eat them, but I thought it was time to compare and write about them too! 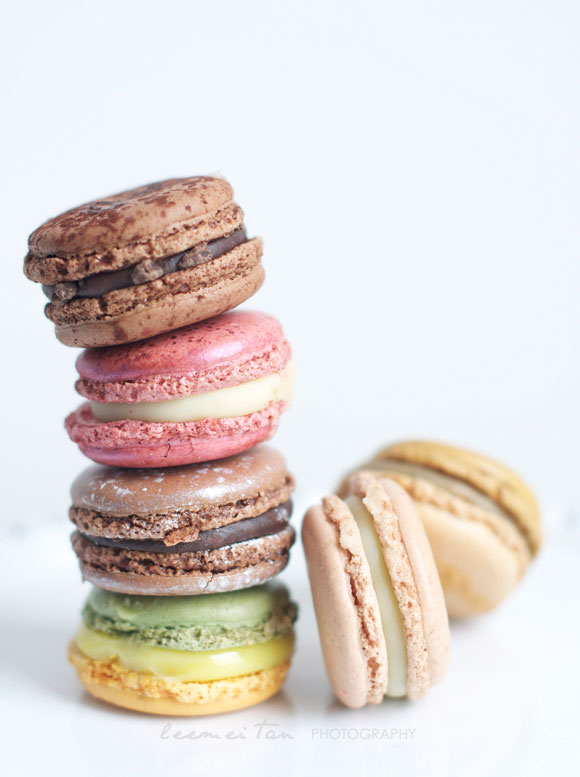 Below is a summary of what I think of both:

For the same size of assortment box, Pierre Hermé have about 2 macrons less than Ladurée. So, in terms of almost the same price paid at around € 23.00 – €25.00, Pierre Hermé appear to be slightly more expensive.

Both appear to have great packaging. However, I find the material use for Pierre Hermé round case seems to be slightly firmer. It has smoother texture, thus nicer to hold.

Pierre Hermé’s macarons stand out quite easily for its lovely shade and the little touches, such as cocoa powder, small pieces of nuts, silver powder, etc on top of the meringue disc. Ladurée has more conservative and classic colour choices that you would normally expect. Pierre Hermé seems to be more generous with its ganache, so you can easily see the layers clearly – meringue, ganache and meringue. As for Ladurée, the ganache layer seems to be on the stingy side, which could be the reason why it makes it overall less sweet – point 4.

Macarons from Ladurée is less sweet (for me) compared to Pierre Hermé’s. The meringue discs for both are equally great and light. However, I find  the meringue disc from Pierre Hermé is slightly thicker, but still light and not affecting its overall texture.

Pierre Hermé is the winner in this area. Imaginative combinations of flavours, modern twist and real taste of fruit are carefully considered and well executed. I love the very unusual modern tastes and flavours – huile d’olive à la mandarine (olive oil with mandarin), crème brûlée, chocolate & foie gras, etc. As for Ladurée, it’s more of classic flavours, such as lemon, vanilla, raspberry, rose, chocolate, etc. Having said that, there are new seasonal flavours at Ladurée from time to time.

So, Pierre Hermé seems to be taking the lead in most categories. Which is my favourite?

Personally, I kind of prefer Ladurée, for one reason that it is less sweet. And I am fine with the classic flavours that never go wrong.However, I am completely impressed with Pierre Hermé’s creativity in macarons making.

It’s a tough choice. But, I think I fell for Pierre Hermé, for its generosity of ganache. If I could give one suggestion/request about Pierre Hermé’s macarons, in order to make me a convert, I would say cut down the sweetness slightly and that would make me really happy!

For those who have tried both Ladurée and Pierre Hermé, I would love to hear what you think.