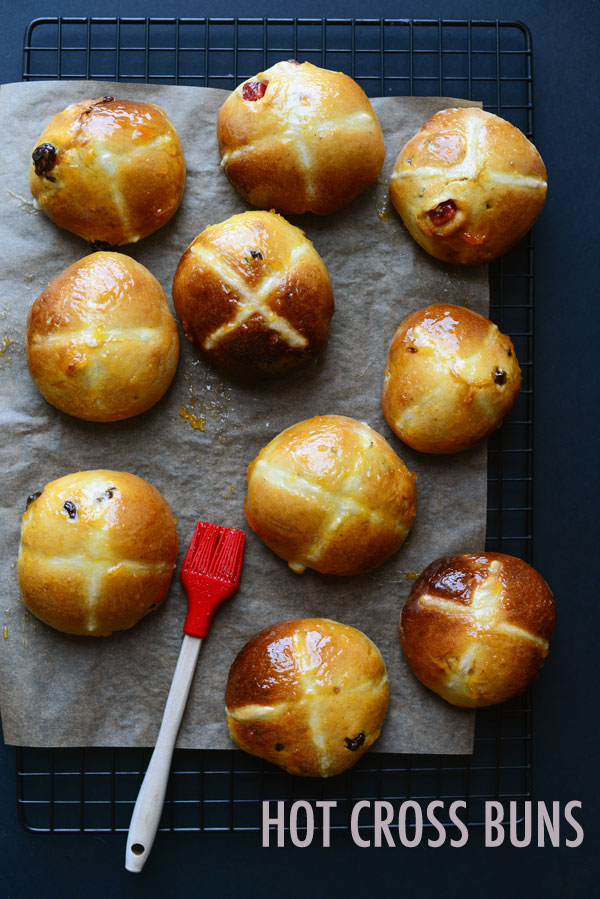 It’s officially spring now but the weather here still isn’t spring-like. I still need to wear my winter coat when I go out. 🙁 Seriously, I have no idea what’s wrong and when will we have decent warm and sunny weather! At least, a long weekend has kind of cheered me up! 🙂

Time  just flew by without my realisation and a long weekend is a luxury for me! Of course, it wouldn’t make sense if I just do nothing and waste all the free time I have. So, I have decided to make some hot cross buns to give myself an Easter treat!

Hot Cross Buns are spiced sweet buns made with currants or raisins that are generally eaten on Good Friday, when Christ was crucified on the cross and His return to life on the Sunday following his death on Friday, which is Easter – the preeminent feast that celebrates His resurrection. The cross on the bun is the symbol of crucifixion.

Never have I before attempted baking hot cross buns so I was really excited to get my hands on! I found some recipes on the internet and after checking all the ingredients, they seem pretty straight forward and I have them all in my larder and fridge. I think hot cross bun is pretty similar to Panettone, as it also uses raisins and citrus peels. Both have fluffy and light inside, just a good tea time treat!

For the Hot Cross Buns:

1. Bring the milk to the boil, then remove from the heat and add the butter. Leave to cool until it reaches hand temperature. Put the flour, salt, sugar and yeast (see Tip, below) into a bowl. Make a well in the centre. Pour in the warm milk and butter mixture, then add the egg. Using a wooden spoon, mix well, then bring everything together with your hands until you have a sticky dough.

2. Tip on to a lightly floured surface and knead by holding the dough with one hand and stretching it with the heal of the other hand, then folding it back on itself. Repeat for 5 mins until smooth and elastic. Put the dough in a lightly oiled bowl. Cover with oiled cling film and leave to rise in a warm place for 1 hr or until doubled in size and a finger pressed into it leaves a dent.

3. With the dough still in the bowl, tip in the sultanas, mixed peel, orange zest, apple and cinnamon. Knead into the dough, making sure everything is well distributed. Leave to rise for 1 hr more, or until doubled in size, again covered by some well-oiled cling film to stop the dough getting a crust.

4. Divide the dough into 15 even pieces (about 75g per piece – see Tip below). Roll each piece into a smooth ball on a lightly floured work surface. Arrange the buns on one or two baking trays lined with parchment, leaving enough space for the dough to expand. Cover (but don’t wrap) with more oiled cling film, or a clean tea towel, then set aside to prove for 1 hr more.

5. Heat oven to 220C/200C fan/gas 7. Mix the flour with about 5 tbsp water to make the paste for the cross – add the water 1 tbsp at a time, so you add just enough for a thick paste. Spoon into a piping bag with a small nozzle. Pipe a line along each row of buns, then repeat in the other direction to create crosses. Bake for 20 mins on the middle shelf of the oven, until golden brown.

6. Gently heat the apricot jam to melt, then sieve to get rid of any chunks. While the jam is still warm, brush over the top of the warm buns and leave to cool.