Blogging world is always full of surprises! One day, I landed on a beautiful food blog called Gourmand in The Kitchen. The name of the blog, as the author, Sylvie says, describes a person who has great interest in food, which I think it reflects really well. Page upon page as I browse, I can tell Sylvie’s passion in food and photography. Each dish that I have seen so far is very delicious looking and often very beautifully captured. I am happy that internet has got me connected with like-minded people, and of course, today I am very happy to have Sylvie with us. Please welcome her!

Thank you Leemei for inviting me to guest post on your blog.  It’s a pleasure to be here.

Potatoes aren’t new, they aren’t trendy, and they don’t garner much attention. The humble little potato (as it’s often referred to) is the soft-spoken cast member of the “vegetable play,” playing the supporting role but never the star.  It’s relegated to side dishes where it’s mashed beyond recognition, stuffed with loads of cheese, butter and vegetables or drowned out by bolder flavors in a myriad of other preparations.

One of the most omnipresent and abundant of vegetables, the potato is the essence of simplicity and a joy in itself.  Which leads me to ask – why is something so splendidly simple not enough?  Why drown the beautiful potato in things that will mask its true flavor? 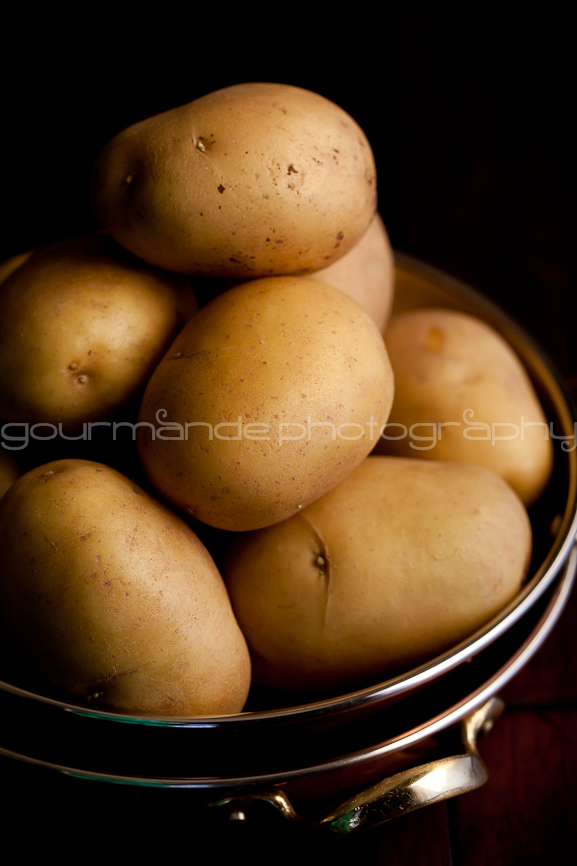 If you have good potatoes, like creamy little new potatoes or fingerling potatoes, sometimes the best way to eat them is to steam or boil them and serve them plain.

Growing up, my family would make a meal of potatoes.  We would boil small new potatoes in their skins and serve them with butter and parsley or crème fraîche and chives, and if we were feeling particularly indulgent, maybe a little grated parmesan.  There’s a great sense of pleasure in the known and anticipated taste of preparing potatoes in this manner that I urge you not to dismiss because of its simplicity. 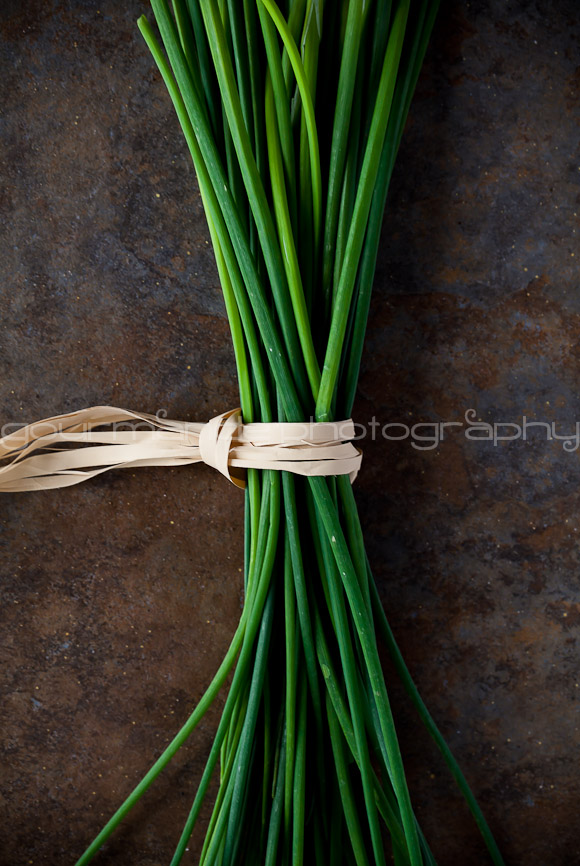 The French call potatoes prepared in this manner “pommes de terre en robe des champs,” which refers to potatoes prepared with their skins on, but literally translates to “potatoes in a dress of the fields.”  It’s also sometimes referred to as “pommes de terre en robe de chambre” which is most likely a perversion of the first saying but one I find quite charming as it translates to “potatoes in their bathrobes” which I think is a lovely way to describe potatoes.

Oddly enough, although they are prepared and served with the skin on, the French don’t eat the skins and will slip them off before consuming the potatoes.  I have yet to adopt this strict potato peeling protocol and will gladly enjoy mine with the skins on.

I offer this recipe in the spirit of elevating the overlooked potato to a more prominent role.  Warm creamy potatoes are dressed with smooth rich crème fraîche, fresh chopped herbs and lightly perfumed with a bit of grated lemon zest and a squeeze of lemon juice. 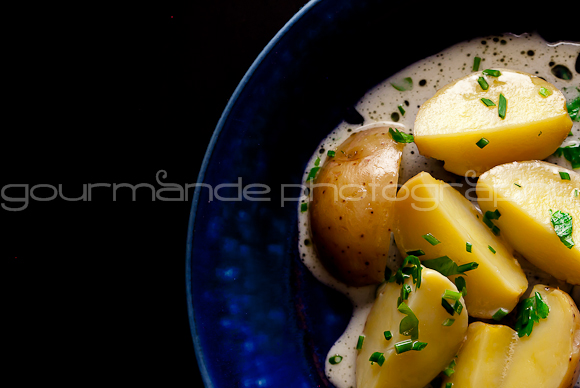 For the Guest Post: Potatoes with Crème Fraîche Sauce:

1. Put the potatoes in a large saucepan, add cold water to cover by about an inch. Bring to a boil, lower the heat, and simmer gently until potatoes are tender, anywhere from 10 to 20 minutes depending on their size (test doneness with a fork).

2. When the potatoes are done, drain all the water and let them sit in the pot for five minutes to steam and dry.

3. Whisk together the crème fraîche, lemon juice, lemon zest, olive oil, parsley and chives in a small bowl until combined. Add salt and pepper to taste.

4. Halve or quarter the potatoes, if large and toss with the crème fraiche mixture. Serve warm with a simple salad of mixed greens if desired.