Home » Get Your Jelly On – Day 6: Victoria Sponge Yey! One more day till the weekend! Seriously, I can’t wait! This week has been flying by and I have had trouble to sleep for the last 2 nights. I know, it’s not good and I didn’t feel really well when I woke up this morning. I have to blame the weather as we had glorious and sunny ‘summer-like’ days in the beginning of the week, then the temperature plunged from 28℃-29℃ to 15℃-16℃. A huge difference, I know!

So, it was 2 nights ago, I kept thinking of the limitation of the jelly mould being not oven proof. Then, I had a sudden idea to make it very oven-friendly. My solution is using the jelly mould as a tool to help me to ‘clone’ a foil mould, with an exact shape so that it can go into the oven! Hooray! It’s such a useful jelly mould, to use is as a tool and to make things in it!

I have provided the following steps to illustrate how I have made it possible to bake a recipe in a cone shape – exactly like the jelly mould.

1. You need a thick foil roasting tin. Cut off all the 4 corners, which will leave you with only the base. 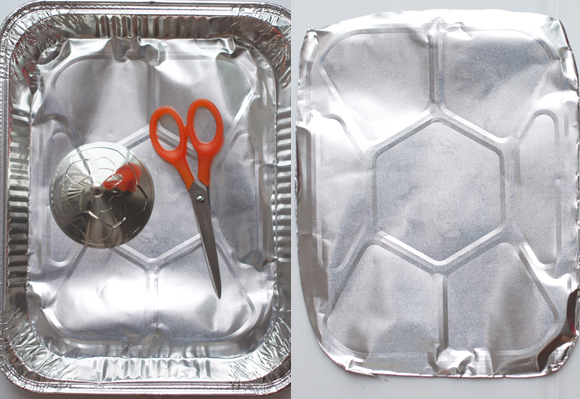 2. Use the jelly mould to roughly outline the size of foil needed, this includes the tip of the mould as highlighted in green. It is easier to estimate if you use the foil and  wrap around the jelly mould to get an idea of the length needed to cover the mould totally. Of course, you need to leave a few extra cm to overlap the first layer. 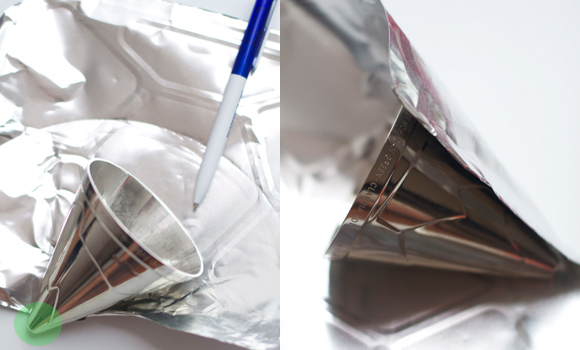 3. Use a pair of scissors to cut the estimate size of the foil, then slowly mould the foil around the jelly mould to get the accurate size. Cut off the excess. 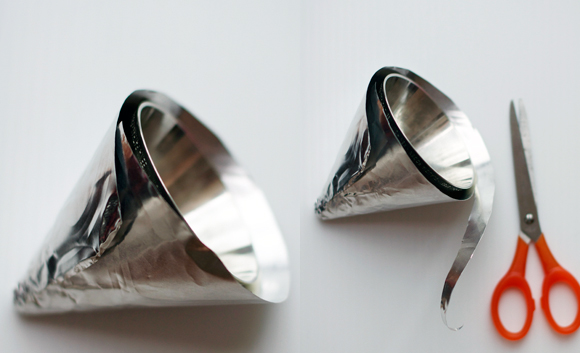 4. Once you get the exact size, wrap the foil around the jelly mould, make sure the tip of the mould is slightly flatten and not pointed, just like the original mould. You could use a heavy object to flatten it. Then, secure with a tape and leave for say 10 minutes or so to make sure it takes its shape as much as possible. Then, remove the tape but the foil still on the jelly mould, wrap a few layers of kitchen foils around the thick foil to maintain and secure the shape before taking off the jelly mould. The ‘clone’ mould is ready to use. 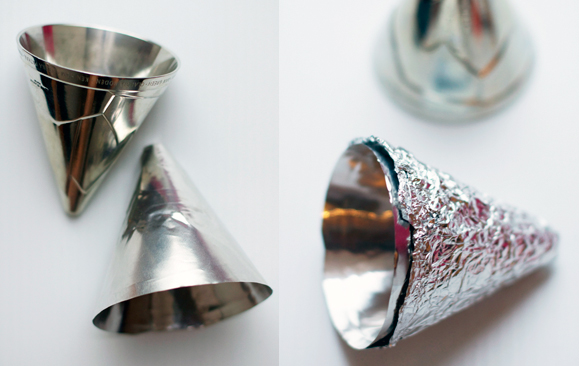 For the  Victoria Sponge:

1. Preheat the oven at 190℃. Grease the mould with butter. In a large bowl, beat all the ingredients until you have a smooth and soft batter. Fill the mould until ¾ full. Put the mould in an oven proof mug.

2. Then, smooth the surface with a spatula. Bake for about 25-30 minutes until golden and the cake is cooked through.

3. About 10 minutes into the cooking time, when the cake start to fluff up and becoming solid, remove from the mug and let it lay in a baking tin so that it will be easily cooked through evenly.

4. Put on a cooling rack and leave to cool completely. Remove from the mould. Cut the cake horizontal into half, spread generous amount of strawberry jam evenly on the bottom half. Top the upper half back to form a cone.

5. Dust a little icing sugar before serving. If liked, you can decorate the upper half of the cake with slices of strawberry.