Happy New Year! How was your New Year celebration? I can’t believe that we have stepped into year 2010! We didn’t do anything much on New Year’s eve, just went to a friend’s place for dinner. I still miss my holiday in France and the food. So, I guess by looking at the title, you would have guessed this post is related to a French dessert.

Far Breton is a flan based dessert made with eggs and milk. It is a very simple but nice dessert originates from Brittany, a region in the north-west of France. There are many versions of Far Breton, but the most well known is the one with prunes. Cinanamon powder is sometimes sprinkled on the top of Far Breton. The texture of Far Breton is pretty similar to Clafoutis, except it’s a bit more dense and almost has quiche-like texture.

France is just an amazing country, its cuisine is represented by each region of its country. If you travel from one region to another, you will find that the cooking-style, tastes, and ingredients change quite significantly! Far Breton is one specialty from Brittany. If you talk about Baked Apples Pomme Au Four, then it’s a specialty from Normandy. What I would like to do one day is to take 1 month off, travel to all regions in France and taste the difference!!

I was introduced to Far Breton a few years back and really love the texture and taste. I am an absolute fan of having fruits in desserts! Far Breton is such a homely pudding that you don’t really have to spend a lot of time to make such a lip smacking dessert. I love the rustic look of it, so simple yet tastes elegantly in the mouth! I thought we should start our 2010 with something sweet. So, there you are my readers, this is made especially for you! 😉 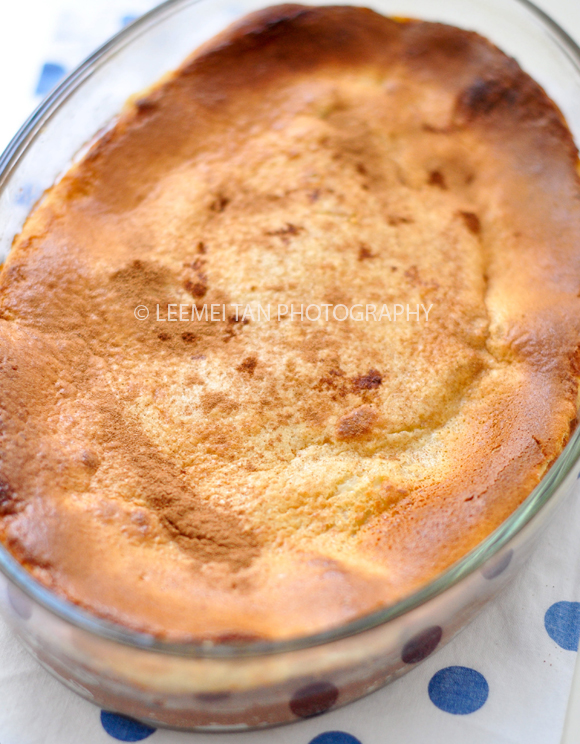 1. Grease a baking dish and lightly flour. Scattered the prunes.

4. Sprinkle some cinnamon powder before serving if desired.