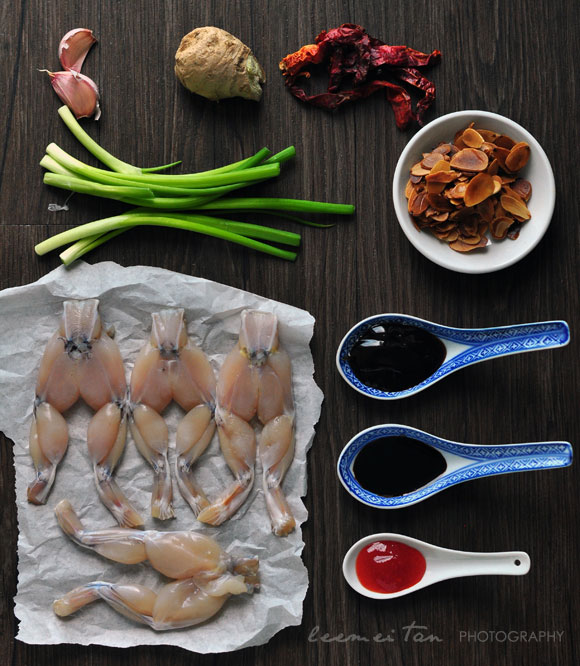 I went to an Oriental supermarket a few days ago. Not that I needed to buy anything specific but I thought I would just browse. As I slowly checked all the shelves, I then walked pass a small fresh meat counter, I stopped and checked what they have to sell. Then, I spotted something that I haven’t seen nor eaten for the longest time ever! Yes, frog legs! Ok, you may think they look gross but, let me tell ya, they have been my favourite meat ever since I was a kid! Some of you may be thinking how could I love eating something that can jump when they are alive! Well, if you haven’t tried frog legs, I think you should give it a go, then you will understand! 🙂

They are not the most beautiful creatures in the world (nor do crocodiles look beautiful and adorable but their meat are eaten by human too!), but I have to say that the meat of frogs is so much better than chicken! They are very lean and firm. When I saw that, my brain received messages asking, to buy or not buy? I stood there, admiring the frog legs and thinking at the same time. I haven’t seen fresh frog legs sold anywhere so far, apart from the last time when I was in New York, at the Chinatown.

When I look at the photos that I took in NYC Chinatown, I still remember the conversation that I had with the Chinese man who was choosing frogs that were still alive! Now, I don’t think I am able to slaughter a frog. I never knew how it was done. I was asking myself if I had to buy live jumping frogs and slaughter them, would I still be able to eat them?

This easy stir-fried frog legs can be done two ways – first option, you could deep fried them, by season then with salt and pepper, lightly coat with flour and deep fried them for about 8-10 minutes until they turn golden brown. The other option is to just stir-fry them. In the cooking method, I will include the deep-fried option, which I think makes the whole dish more complete and tastes better. Enjoy frog legs! 🙂 P/S: You can use chicken as a substitute if you want.

Oh yeah, I haven’t forgotten about the Hotel Chocolat Giveaways! I have random drawn the winners, they are:

Congrats to all the winners! I am sure you will enjoy the yummy chocolates! I will email you all individually for your mailing address!

1. Rinse the frog legs and cut in halves. Season with salt and pepper, then lightly dust them with flour, shake off any excess and set aside.

2. Heat the sunflower oil in a wok or deep frying pan to 180°C or until a small piece of bread turns brown in 15 seconds. Slowly put in the frog legs and fry them for about 8-10 minutes or until they turn golden brown. Remove the frog legs with kitchen tongs and drain on kitchen paper.

3. In a new pan or wok, add 1 tbsp of the used oil over medium-high heat, add the garlic, ginger and red chillies. Fry for 2-3 minutes until they are fragrant. Then, add the oyster sauce, dark soya sauce, chilli sauce and water. Stir until combine. Bring to the boil, add the deep fried frog legs. Stir thoroughly to make sure the sauce coat evenly. Cook for about 2 minutes to heat up. Add the spring onions, stir to combine.

4. Transfer to a serving plate, sprinkle over the toasted almonds and serve warm with boiled rice.