As well as fishing sustainably, we should also be using every part of the fish that’s edible. Monkfish liver, for example, is a delicacy. Monkfish cheeks and even the bones and heads can all be put to use in the kitchen! Not too long ago, I found out a cheaper way to eat monkfish! Previously blogged recipe – Monkfish in salted soya bean and black bean sauce, is one of the best ways to prepare monkfish. I used monkfish loin last time. It didn’t cost me a fortune, but it’s still rather expensive!

Not long ago, I went to my usual fishmonger that sells diver scallops. I got some scallops and then he asked me if I wanted some monkfish cheeks. I repeated in my head “Monkfish cheeks?” He replied “Yeah! They are  really good and full of flesh!” I paused for a few seconds. He continued “Give it a try! All you need to do is to slightly coat them in flour, season with salt and pepper. Then, fry them!” Even before I had the chance to make up my mind, he scooped up a handful of monkfish cheeks and weighed them. He then turned to me and said “It’s going to be £2.50.” I paused again. Ok, about 300g of monkfish cheeks costs only £2.50? I then decided to bargain (always do!). I got it down to £2.00!! 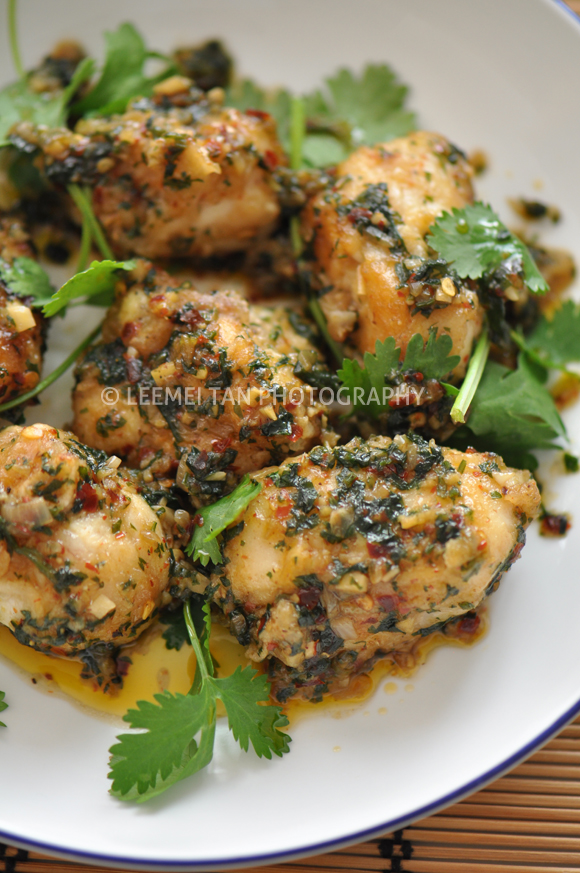 Monkfish cheeks are of course the flesh from the cheeks of monkfish. In the past, monkfish cheeks are discarded but now, they are even served on the menu at the best restaurants! There is no difference in the texture, it is exactly the same to the loin or fillet. Before cooking, remove the membrane enclosing them or this will contract in cooking making the flesh tough.

I got pretty excited when I got home as I wanted to try out monkfish cheeks, I couldn’t wait any longer! Without wasting much time, I thought a quick stir-fry would be the best. It came across my mind a recipe that I made previously, garlic and coriander chicken. I decided to adopt the same ingredients, plus a bit of chili, perhaps? Coriander turns out to be a fantastic pairing with monkfish too! 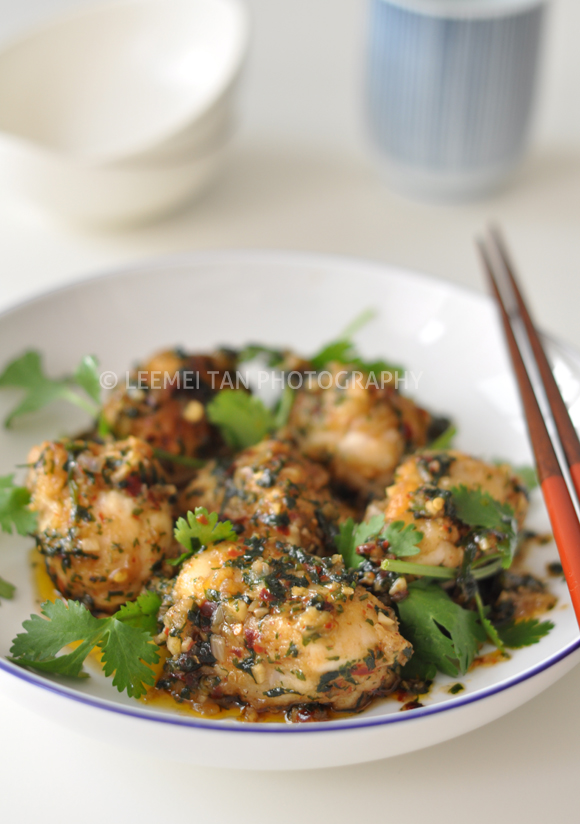 2. Then, shallow-fry the monkfish cheeks in hot oil until slightly brown. Drain and set aside.

3. Chop the garlic and coriander together.

4. Stir-fry the chopped garlic and coriander until slightly brown, and add together the chopped chili or chili flakes and all remaining ingredients.

5. Lastly, put in monkfish cheeks and mix well. Garnish with some coriander and serve warm.