After running some errands this morning, I decided to make my way to Gough Street, Sheung Wan since I was around the area. Gough Street is where the most talked about Kau Kee Restaurant is located. Kau Kee Restaurant (九記牛腩) is said to be one of the best restaurants that specialises in beef brisket noodles. If you google “best beef brisket hong kong”, you will get the entries that have this restaurant mentioned. Kau Kee has been in the business for more than 90 years. So, it must be so good that is keeping its business going.

When a restaurant gets so much of attention online/magazine/guidebook, it has to be really good, right? At times, I do get really curious of how good it is that everyone raves about it. Pictures that show long queue formed outside of the restaurant before it was even opened for business do raise great curiosity. Or should I just ignore the queuing fact as it happens all the time in Hong Kong no matter what?

I was kind of lost at one point when I was on my way to Gough Street. Google map sometimes couldn’t detect my location. At one point, I had to climbs over 20 flights of steep stairs that made me even more hungry that I wished I didn’t have to wait but be the first customer of the restaurant. From far, I could see the 九記牛腩 signboard. At 12:10, there were already more than 20 people queuing up in front of the shop, and it wasn’t even opened! As time passes, more and more people queued after me.

I joined the queue. I always keep an open mind and not to have too high expectation when I try a restaurant for the first time.

As soon as it struck 12:30, the queue started moving and I was excited. The moment I was asked to be seated, sharing a small table with 6 strangers, I began to feel it was going to be a rushed lunch. I ordered a glass of iced lemon tea to quench my thirst, while waiting for my bowl of beef brisket thick egg noodles in clear broth. Customers have the option to choose flat rice noodles, thick egg noodles, vermicelli and e-fu noodles. 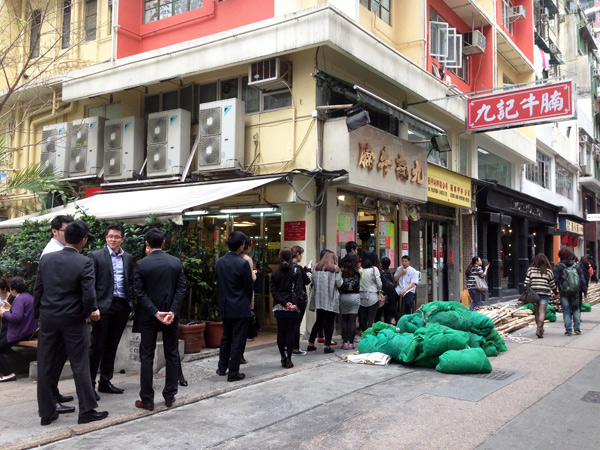 Service was non-existence. It felt like a drudgery work; waiters were shouting instead of speaking. The lady sitting at the cashier had a solid poker face. It felt kind of stressful to dine at this kind of ambience: Sit, order, eat, pay and go!

The iced lemon tea was served with too much ice, I had tried better ones. Soon, my bowl of beef brisket noodles that is priced at HK$40 was presented in front of me. My first thought was, the beef looked tender. I started to dig in. Then, I realised I forgot to take a picture with my iPhone. I didn’t plan to write a review and thought it would just be my casual lunch when I decided to join the crowds.

The flat thick egg noodles have nice texture, cooked al-dente. I tasted the broth, after a few sips, I thought it was more on the salty side. I couldn’t taste any hint of herbs as to what some people wrote on their reviews.

It’s undeniable that those beef brisket chunks had been cooked for hours that could easily break into pieces effortlessly. They came in generous portion and were really tender and could almost melt in the mouth. And, that was about it. I felt cheated! I thought there should be more? Apart from the beef, there was nothing too amazing about this bowl of noodles.

It was probably me. I was expecting the broth to be more intense and flavoursome – infused with some spices. Perhaps, clear broth doesn’t excite my tastebuds. I couldn’t quite justify its popularity apart from the super-tender-almost-melt-in-the-mouth-beef-brisket.

The thought of being in a long queue with blunt service doesn’t really appeal to me. Maybe I should have tried one with curry broth? But, I don’t know if I would after spoken to a lady sitting next to me who had one with curry broth and wasn’t impressed. She looked really disappointed and said she wouldn’t come back as there was nothing special about it. She didn’t finish hers. At one point she was kind enough and asked if I had a napkin and offered me one, and said “they charge HK$20 for a packet!” So, bring your own tissue paper!

I can be quite fussy eater, especially so, when a place that has been most recommended. If I feel happy after a meal and leave with good vibes, then I will crave for it and go back. The experience at Kau Kee made me feel very unwelcome and rush. I guess that’s how it is – not to expect too much, you will either love it or hate it. After all, a bowl of beef brisket noodles and a drink cost only HK$60 (£4.70), at least I’ve tried!

For the Beef Brisket Noodles at Kau Kee, Hong Kong: