I stumbled upon her blog not too long ago. Her talent in cooking and food photography catches my attention. The more I read, the more hungry I became. Sefa, the owner of Food is Love has done a very good job on her blog.

The recipes that she shares Her are authentic Indonesian cooking. I have not tried a lot of Indonesian food. Only when I visited Bali. Through Food is Love, I am getting to learn so many new things that I never knew in Indonesian cooking! Let’s welcome Sefa today, sharing with us one of her great recipes!

When Leemei asked me to be a guest writer in her blog, My Cooking Hut, I was flattered as I am still a rookie in food blogosphere while she is quite famous among the foodie bloggers worldwide. Definitely I said yes.

Actually I supposed to make this post last January; unfortunately I was sick for two weeks then had to prepare for my final exam. Fortunately, Leemei is a very tolerant and understanding person; she lets me take my time to complete the article. Thanks Leemei!

Ayam Masak Habang or translated as chicken cooked in red chilli sauce is originally from Banjar, South Kalimantan, Indonesia. It is a very special dish in Banjar that can be served everyday or when one have visitors or when there are special occasions such as wedding, eid ul fitr, ritual meeting, etc. Though during the special occasion it’s served with nasi kuning (yellow rice) but eating ayam masak habang with nasi kuning is also normal for breakfast. For an everyday eating, ayam masak habang is normally served with steamed rice which rice is long grain one with a broken white colour. When they eat ayam masak habang with this kind of rice, they’ll have vegetables soup consist of carrot and potato as the side dish.

I am so lucky to have a Banjarese friend living in US. When I asked her about the recipe, she gave me the authentic one that she got from her mother. She told me that the correct way in cooking ayam masak habang is without burning the chicken and only left oil and the spices.

If you see from the photo of ayam masak habang that I cooked, the colour is not red. It supposed to be red but mine is brown instead. It happened because I used Thailand’s dried red chilli. This kind of chilli is turning brown when you cook and mix with other spices.

When I reported this issue to my friend, she told me that it always happens when using Thailand’s dried red chilli. She suggested to buy California’s chilli or New Mexico chilli’s since they are almost similar with the one used in Banjar. Unfortunately I haven’t found that type of chilli. But never mind the colour as it tasted heaven!

The authentic ayam masak habang used ayam kampong (chicken that living freely outside the cage) but it’s hard to find ayam kampong in Germany unless you have your own farm or buying from the farmer directly. But don’t worry, my friend’s mother gave a tip when not using ayam kampong that is to cook chicken without oil over small head until all water from the chicken evaporated. This method can get rid of the rancid from the chicken meat. I followed the tip and it worked. The chicken tasted much better without that rank smell.

Nasi kuning that is served for ayam masak habang is different from the normal nasi kuning found in Java, Indonesia. It has more spices inside but both cooked in coconut milk.

Now, let me share you the recipes of Ayam Masak Habang and Nasi Kuning. 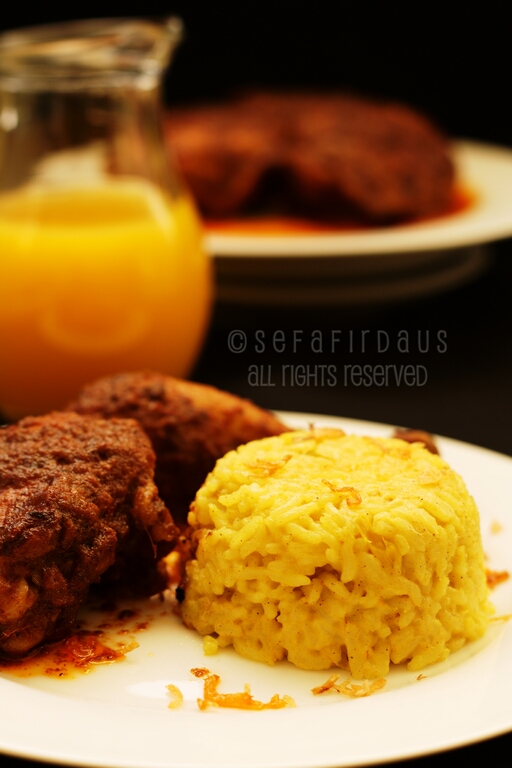 For Nasi Kuning, I cooked it in a shortcut by using rice cooker. But first I soaked the rice in water for 30 minutes to avoid rice for being uncooked. In this recipe, I made my own measurement since my friend only gave me the ingredients. You can make your own as well.

For the Ayam Masak Habang:

For the spices paste:

4. Add water when chicken meat changes its colour. Continue cooking until water evaporated. Stir thoroughly and turn the fire into small heat when the water started to be less.

5. Continue cooking until all water evaporated and only left oil and spices. Removed from the heat.

6. To cook the rice: heat oil in a small pan. Sauté the spice paste until fragrant. Remove from the heat. Set aside.

7. Mix the rice, coconut milk, sautéed spices and other ingredients in a rice cooker container. Cook until set.