“Since we are in Tokyo, I think we shouldn’t miss this opportunity. Even if it means we will get less than 5 hours of sleep.”

I set the alarm at 04:45. Even before the alarm went off, my brain sent a message to wake me up from my deep sleep. It usually take me some time to be fully awake, but that time, it literally took me less than 5 minutes to wake up. I didn’t feel tired as I was excited! I couldn’t wait to see Tsukiji Fish Market and the tuna auction, which had recently opened to visitors. Tsukiji Market (築地市場), is the biggest wholesale fish and seafood market in the world. The nearest metro station is Tsukiji on Hibiya line. 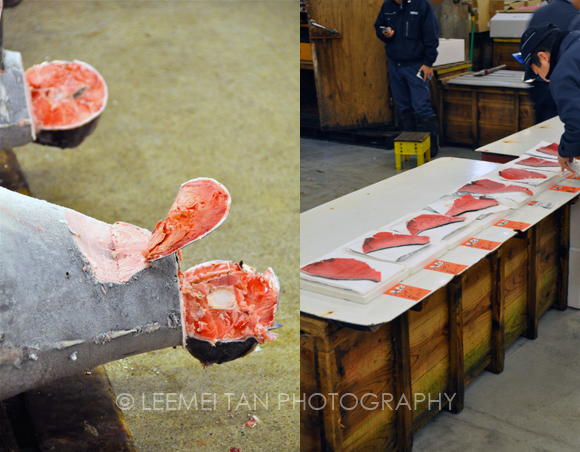 As the metro didn’t start until 05:10, we decided to take a taxi to get there. Not the cheapest option but I didn’t want to miss the once in my life time experience witnessing the tuna auction. Well, talking about tuna, I recall one article that I read on the internet about the depleted global stocks of tuna, which one of the key factors behind it was Japan’s insatiable appetite for it. Fish is Japanese staple food for centuries, it may be difficult but  I think we now have to eat sustainable catches.

A taxi ride to the ever famous Tsukiji Market that is always flocked with visitors from Shinjuku will cost around ¥ 3,000. We quickly made our way to the auction once we arrived.  We had to squeeze through the crowds to get a good spot to see the auction. Every gesture and word from the auctioneer didn’t quite make sense to me. But, in the end, all the gigantic tuna belong to some winning bidders. Tuna were then taken away. 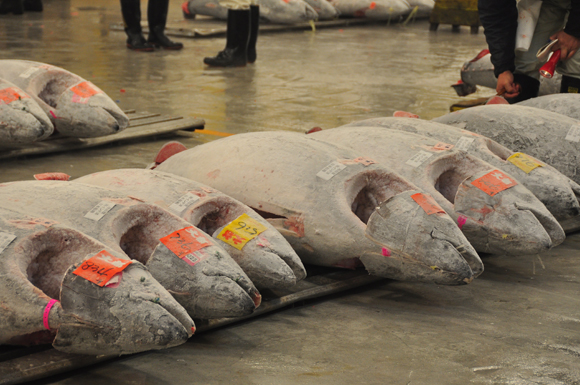 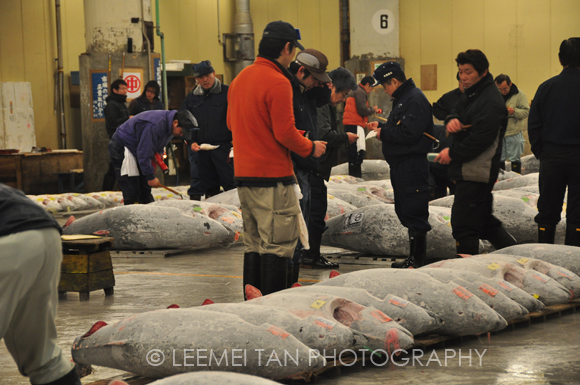 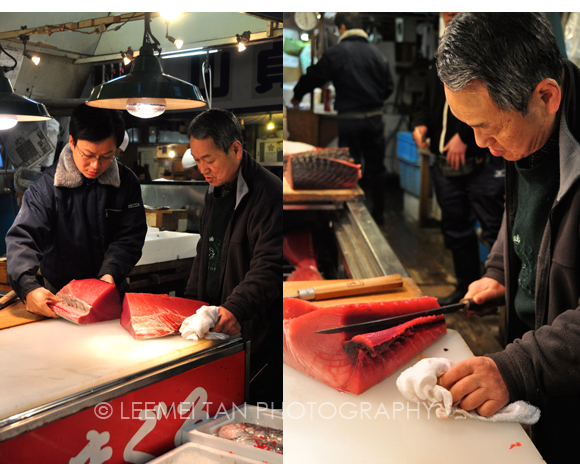 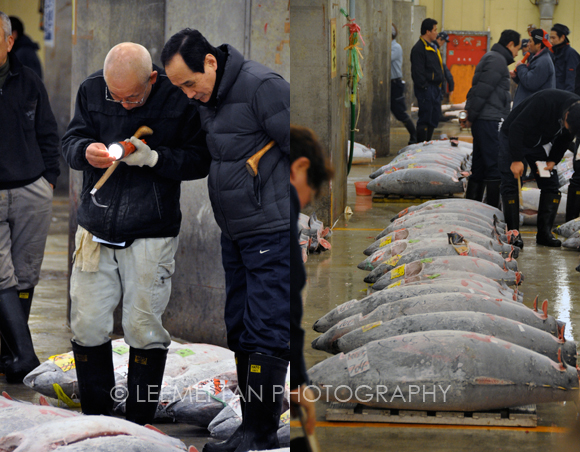 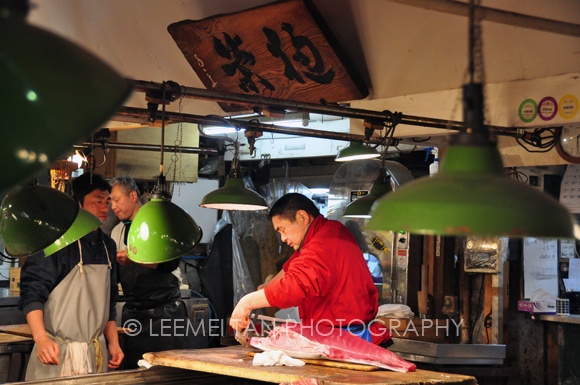 We walked around the market to check out some stalls. Presented in front of the shops were freshly caught seafood and fish. Some were not identifiable. Japanese do eat a lot of produce from the sea. My initial thought was it must be expensive. But, after I checked out the prices and converted to GBP; I realised it was NOT expensive after all – for the choices and quality! 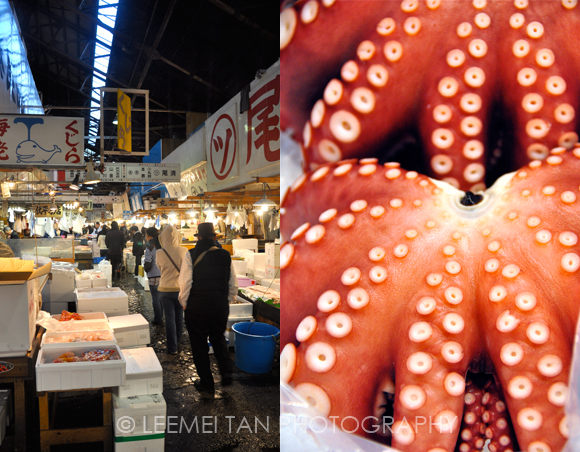 I witness how a gigantic tuna was prepared – wash and sliced into chunks. The knife used wasn’t a knife, more like a sword! 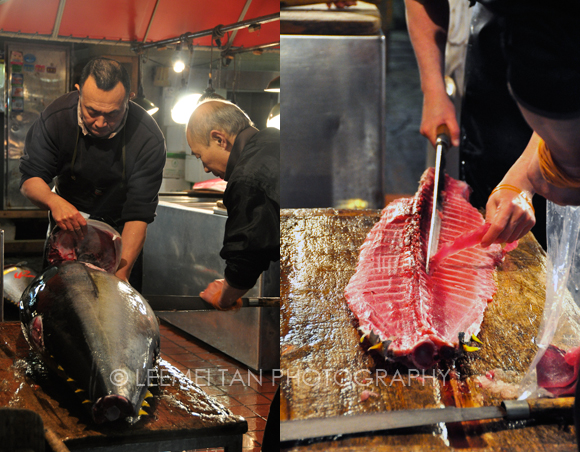 After a few minutes, we walked pass a shop. A friendly middle-age man looked at us staring at the big tuna. He was friendly looking and attempted a conversation with some basic English. We used our limited Japanese to ask if the tuna was delicious. He nodded and responded in Japanese, which we couldn’t understand. He walked away to reach for something.

Came back with him in his hand was a scallop shell. He said ‘spoon’. Without us realising, he used the clean scallop shell as a spoon and reached for the tuna in front of him, scooping out some tuna and placed it in a plastic box. “Try, oishii” he said and passed us the plastic box that contained some yellow fin tuna. “Chotto matte”. He poured some shoyu (soya sauce) in another plastic box.

Right in front of us was probably the freshest tuna sashimi that we were going to sample! I carefully dipped my portion of sashimi in the shoyu before putting it in my mouth. “That was just heavenly delicious! The tuna practically melted in my mouth without much effort to chew. The addition of the shoyu has brought out and enhanced the taste of the tuna, just unbelievable!” We were stunned by the freshest sashimi that we have ever had in our entire lives! We passed back the empty plastic boxes (my stomach was shouting: I want more!). We said many times of ‘Arigato gozaimasu’ and bowed many times before we walked away. Now, I understand the Japanese’s insatiable appetite for it!

Around Tsukiji Market, there are plenty of restaurants. It was only 07:00 after we have checked out most of the stalls. So, what’s next? All the restaurants have already started to serve breakfast. When I talk about breakfast, I am talking about having sushi or sashimi for breakfast!

Well, I have never had sushi or sashimi for breakfast before. We just walked around to see which restaurant to choose. We came across a restaurant that serves Chirashi. Chirashi is basically a bowl of sushi rice topped with sashimi. “Fancy that?” We decided to join the queue. When there’s a queue and there are many locals eating, then, it must be good. Unfortunately, I wasn’t able to take photo of my Chirashi, there was a sign in the tiny restaurant says ‘No photo.’ Anyway, my chirashi came in a medium bowl of sushi rice sprinkled with some black sesame, topped with a generous portion of sliced tuna, salmon, seabream and ikura (salmon roe). It was indeed delicious and I feel healthy to have such fresh sliced fish for breakfast!

With a happy stomach after breakfast, we made our way to Ueno Park (上野公園). Ueno Park is one of the most popular parks for cherry blossom viewings. This whole cherry blossom thing really made me go gaga over them! The Japanese appreciate every moment of it. They picnic in the park, with friends and family. While enjoying good food, there are those pretty sakura to look at! As you could imagine, I took lots of pictures of cherry blossom, they are just too pretty! 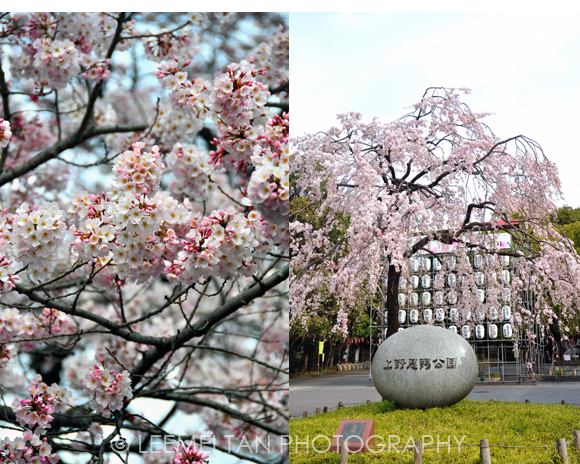 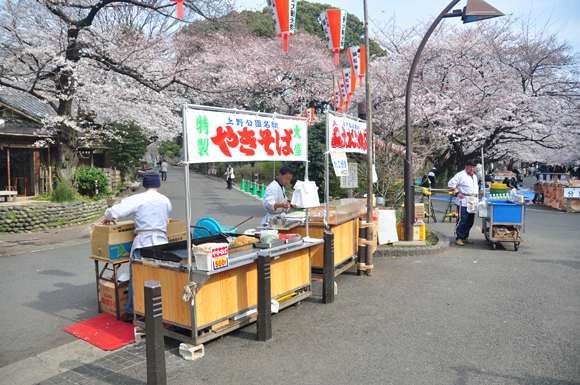 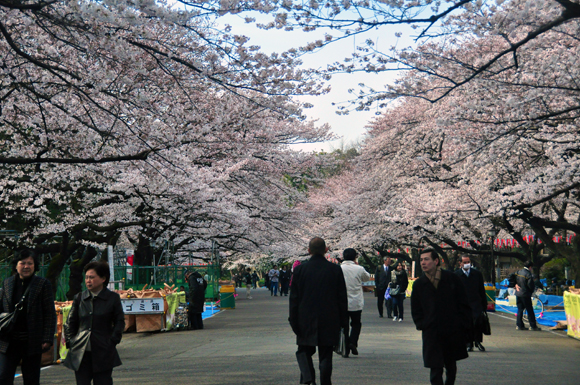 So many parks can be found in Tokyo. Yoyogi Park (代々木公園) is another one that you may want to check out. Yoyogi Park is one of the largest parks in Tokyo and it’s near to Harajuku station. On Sundays around the outer perimeter of the park, bands and individuals play music. The band often have generators and amplifiers so it can turn into a battle of bands. Again, during cherry blossom season, there’s nothing better to do but to enjoy the magnificent views of sakura and spend time with friends and family along with some good Japanese food! 😉

To leave a destination is difficult, let alone leaving a country that you are visiting. Somehow, some countries will make you fall madly in love with and will remain in your memory for life. Before we waved goodbye to Tokyo to our next destination, a must not miss is Tokyo tower (東京タワー). Tokyo tower is a communications and observation tower. Stands at 332.5 metres, which the structures is an Eiffel tower -inspired lattice tower that is painted in white and orange. The lights reminds me everything that I have seen in Tokyo that will remain in my memory for a long time. 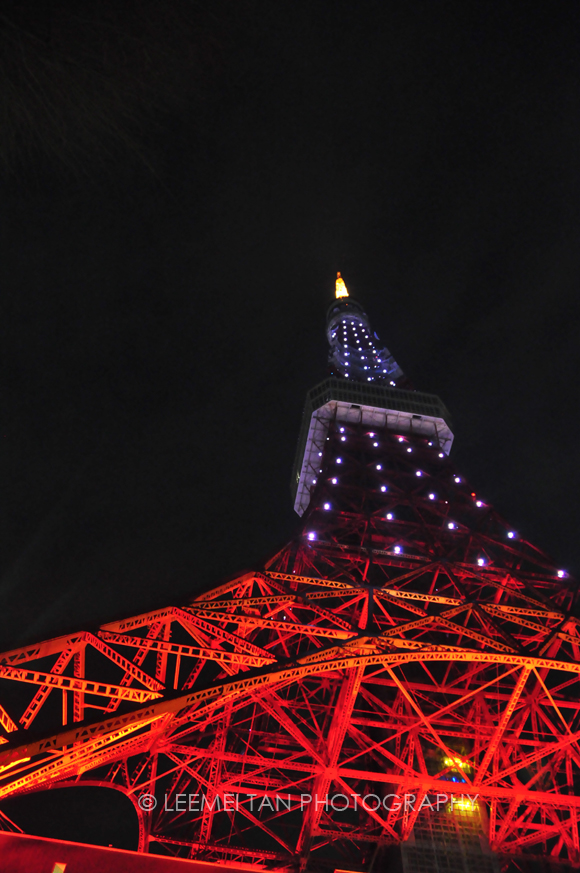