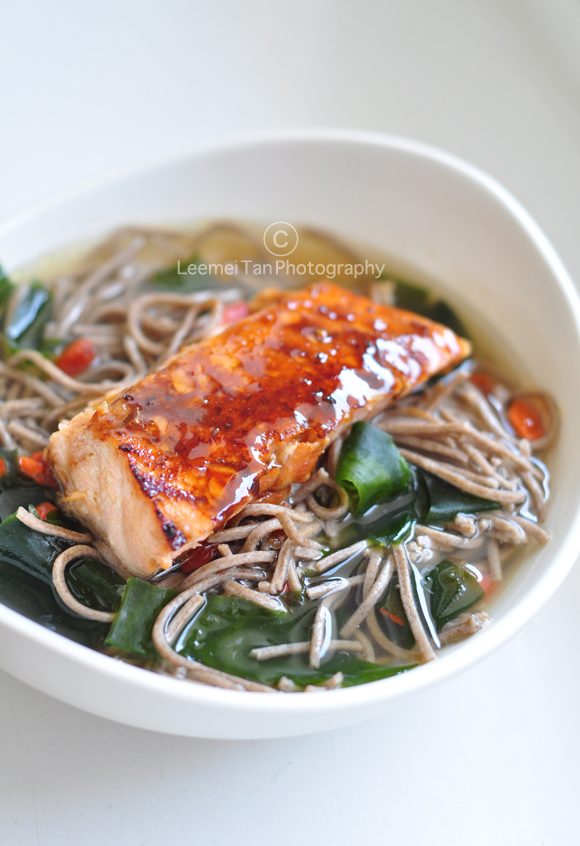 Oh.. I didn’t realise I still have some soba noodles left in the larder. In fact, there are certain things that I have almost forgotten that I bought probably a while ago! It’s good to clear out the larder from time to time. However, this time, I had to clear out my fridge, freezer and larder for mostly perishable items or almost near to the expiry date as I will be moving to a new place (still in London) on Wednesday!

Yes, as hard as I could imagine, it’s only 3 days left before we move!! I need to make use of the internet as I will be living without the broadband for maybe 1-2 weeks. (It’s gonna be horrible, but I will try my best to check out your latest blog post and also response to comments).

For the past few days, we have been really busy packing and throwing stuff (that we don’t need anymore) away! I never realised that there are so many things until I counted the boxes!! There is huge number of boxes that are tagged ‘kitchen’… hahah.. yes!! quite a number of boxes. I think we have packed most of our stuff, just a few that we have to put in our bags at the very last minute. Then, we are good to go!!

So, it was because I was clearing out the fridge, freezer and larder, I found some ingredients that I thought would make good combo – Soba noodle soup with teriyaki salmon!! I made Soba Noodle & Five-Spice Pork Salad about a month ago. This month, it’s a soup dish that makes a slight difference!

If you are new to Soba noodles, this could be a very simple but delicious dish to try to enjoy! This Japanese noodles are made of buckwheat flour. The soup base that I use is dashi broth. To be more specific, it’s kombu (dried kelp) dashi. Dashi is Japanese stock that is used widely as soup, dipping sauce, and simmered dishes. There are many types of dashi such as kombu (dried kelp), katsuo-bushi (dried bonito) flakes, niboshi (dried small sardines), hoshi-shiitake (dried shiitake mushrooms),… etc.

You could use also use Tsuyu, which is one of my favourites too. In fact, hot Soba is also often served as a noodle soup in a bowl of hot tsuyu. The hot tsuyu in this instance is thinner than that used as a dipping sauce for chilled soba. Tsuyu is made of a mixture of dashi, sweetened soya sauce and mirin. If you don’t want to make it from scratch, you can easily get it from Chinese or Japanese supermarkets.

Teriyaki salmon is probably no stranger to you. You can make the sauce yourself or grab a ready made in a bottle from most supermarkets. I do suggest to make from scratch as it’s really simple and it tastes better! Give this Soba noodle soup with Teriyaki salmon a try, you’ll love it. Till then, I will have more new postings after I have settled in! Actually, I am really looking forward to move as the kitchen is much bigger 😉 (it’s really really important for me!)

For the Soba Noodle in Kombu Dashi with Teriyaki Salmon:

1. To make kombu dashi, soak the dried kelp/seaweed in water for 2 hours. Put the kombu and water in a cooking pot. Put on medium heat. Turn off the heat when the water comes to a boil. Then, remove the kombu with a strainer. The remaining liquid is your kombu dashi.

2. Cook the soba according to the packet. Drain and set aside.

3. To make teriyaki salmon, marinate salmon with sake, soya sauce, mirin, and sugar for 10 minutes. Then, heat up a pan and add the sunflower oil. Put the salmon skin side down and cook for 3 minutes or until crispy and brown. Turn and cook the other side for another 2-3 minutes. Pour any remaining sauce over.

4. Remove from the heat. To serve, heat up the broth. Divide equal portion of soba into individual bowls. Lardle good amount of dashi over. Garnish with goji berries if desired. Place the teriyaki salmon on top of the noodles. Sprinkle with some toasted sesame seeds.