Sometimes, it amazes me how simple a dish could be. The ingredients do not have to be too complicated as long as they come in good quality. My last few visits to France, I have had a real nice country-style potage. In English, it is pottage. Potage or pottage means thick soup, which often contains meat and vegetable which are boiled with water and then whizz the soup with a blender or with a stick blender.

The fresh produces in France are just amazing. Not only they have the best quality but they are sold at reasonable price. Every time I visit France, I like to go to the farmers market. I love to choose my vegetables, fruits, fish, and meat. Also, I love the produces that come without plastic packaging. Fresh produces in France are mostly grown in France. It could be that I was brought up in Malaysia. Going to the market is not something unfamiliar. Seeing chickens or pigs being slaughtered do not make me feel gross or make me weep. I know where my meat, vegetables, and seafood come from. That’s the way it is.

In the UK, probably 80% or more of fresh produces are flown in from other countries. Except for certain produces such as asparagus, potatoes and a few more items. Fruits are mostly imported from elsewhere too. I believe that more and more people prefer to buy local produces but I guess, the supermarkets are not doing their best to help these small to medium scale farmers. They would rather fly in produces from Kenya, Egypt, Morocco and etc. The option to buy fresh produces from the farmers market in London do not appeal to me much. Borough market is one good example. It could be nice if it was the first time you visit Borough market to check what they have to offer. After a few times, you would feel that you got ripped off because you couldn’t find purple carrots or purple broccolis at any other supermarkets. After all, they have more food stalls than fresh produces stalls.

I remember a few years back when I went to Caen for the first time. It was such an exciting moment when we went to check out the biggest farmers market in the town centre. Trust me, it’s totally different from Borough market and hundred times better! There were so many stalls – vegetables, fruits, meats, and not to mention seafood! There were probably more than 8 fishmongers! So, there’s a competition there. In comparison to Borough market, you have 2 or 3 fishmongers. All of them bought their supplies from Billingsgate Market, which is the UK largest inland wholesale fish market. I have been to Billingsgate market and will definitely blog about it because it has totally changed the way I buy fish in this country.

Anyway, the fishmongers are kind of cocky because they do business at the ‘prestigous’ Borough market, which is so popular that thousands of tourists shouldn’t give it a miss while visiting London! So, would you go to a farmers market that is always flocked by tourists? Or would you rather go to a ‘normal’ farmers market? Well, when I don’t have a choice and in desperation for some fresh seafood or vegetables that I can’t find elsewhere, then, I have to force myself to go there, spend a bit more and get what I need, that’s it. So, it doesn’t sound like I like Borough market a lot, huh?

So, I have been talking about fresh produces, markets, and what I think of fresh produces. They are important – both quality and freshness. Ok, I can’t avoid the plastic packing because I have to do my food shopping at Tesco, Sainsbury, Waitrose, and very seldom at Marks and Spencer because their fresh produces are packaged too nicely like presents. I like no packaging, please! And I will bring my own bags. After all, the 3 ingredients that I used to make my potato, carrot and leek do come in plastic packaging, except the leek. With these 3 ingredients, they make one of the best combinations in a form of soup/pottage. You need only 1 potato, 1 carrot, and 1 leek. Well, this recipe is for 2-3 persons. Hence, if you have more people to serve, you probably just need to double the ingredients.

I don’t like my soup to be too thick. Maybe, this is why it probably shouldn’t be called potage/pottage. So, we can call it thin soup. This is  just a simple soup, but it is rich in fibres and vitamins. Beating the cold weather is No.1 or if you are on detox, it could be a great choice too.

What makes this simple soup even more appealing to me is another secret ingredient, which is called nutritional yeast flakes, which I found out through Nelly a few years ago. Nutritional yeasts flakes: (wikipedia: similar to brewer’s yeast. It is a deactivated yeast, usually Saccharomyces cerevisiae. It is popular with vegans and vegetarians and may be used as an ingredient in recipes or as a condiment. Nutritional yeast is produced by culturing the yeast with a mixture of sugarcane and beet molasses, then harvesting, washing, drying and packaging the yeast.) 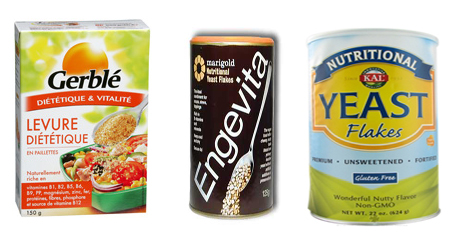 Gerble is a huge brand in France. Their products are popular amongst people who are health conscious, or people with special diet need. I was introduced to nutritional yeast flakes, called levure diététique, which is rich in vitamins B1, B2, B5, B6, B9, PP, magnesium, zinc, iron, protein, fiber, phosphorus and a source of vitamin B12. Did you a lot of Bs? No, I’m not trying to test your eyesight! Vitamin B is your beauty secret! Vitamin B is the champion of beauty! (read it again..) It is essential in growth, maintenance, and repair of tissues. Thus, they contribute to the radiance of your skin, hair and nails!! That appeals to me… the beauty secret!! 😉  That aside, it tastes good, I like its malty flavour. You can serve it in your salad, soup, greens by sprinkling 1 tablespoon of nutritional yeast, which add a different dimension in taste, and of course also for your health! You can easily buy nutritional yeast flakes from any health stores.

Right, so my way of potage is a thin soup but full of nutrients, nothing could be simpler than this!

For the Potato, Carrot and Leek Soup:

1. In a pot or saucepan, put in chopped leek, carrot, and potato.

2. Add in water. Put on the lid and simmer until vegetables are soft.

3. Whizz to a smooth soup a food processor (or slightly chunky if desire). Adjust the thickness of the soup by adding water or more stock.