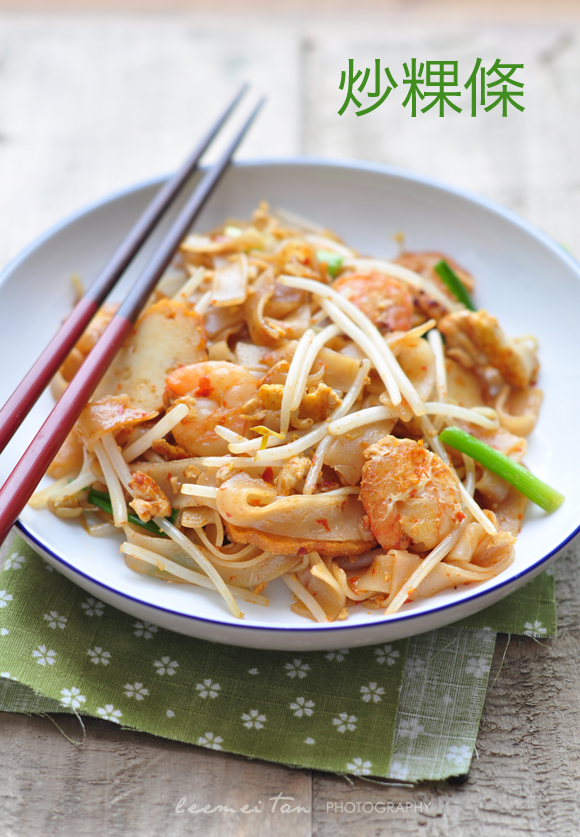 Char Kway Teow/炒粿條/Fried Flat Rice Noodles, is my old-time favourite and popular dish in Malaysia, Singapore and Indonesia. Many of us will relate this dish to Penang whenever it is mentioned. And yes, Penang Char Kway Teow is indeed something that shouldn’t be missed when one visits Penang. Every time I visit Penang, I always make sure I have Char Kway Teow a few times before I leave! Apart from this dish, Penang Asam Laksa is another one that I make sure I savour too!

Never did I know that there is a story behind this dish. In its early days, Char Kway Teow was mostly sold by fishermen and farmers who doubled up as food peddlers at night to supplement their income; they used to use leftovers from meals to whip up this dish, hence its multiple ingredient mix.

Fresh flat rice noodles of 1cm is stir fried with ingredients like prawns, eggs, deshelled cockles, bean sprouts, slices of Chinese dried sausages (lap cheong), fishcake, Chinese chives, fresh chilli paste and seasoned with light and dark soya sauce. Yes, it does sound like there are lots of ingredients, which make this dish so scrumptious! For those that can’t take spiciness, of course, chilli paste can be opted out. When I order my Char Kway Teow at a hawker’s stall, I normally say, “Extra bean sprouts and more chilli”.

To me, Char Kway Teow is equivalent to Pad Thai in Thailand. Though there are slight differences in ingredients and seasonings between these two dishes. Otherwise, both look pretty similar.

Long time ago, a perfect plate of Char Kway Teow was cooked on charcoal stove, which gave a great smoky flavour to the dish. Use of pork fat and crispy pork lard in stir-frying was common. Even until now, some Chinese hawkers’ places still use pork fat and crispy pork lard, I believe. This though, applies only to Char Kway Teow served by Chinese food vendors. For the Muslim population in Malaysia, Char Kway Teow is called Kwetiau Goreng. Ingredients like beef and chicken are quite commonly added too.

Making Char Kway Teow at home is easy. Being miles away from Malaysia, I have always been making this dish to satisfy my cravings. My version of Char Kway Teow is very simple, I use only eggs, prawns, fishcake, bean sprouts (lots of them that give freshness and crunchy texture), and spring onions (to substitute Chinese chives). Of course, homemade chilli paste is mandatory for me! Even if less ingredients are used, the taste is just as fantastic!

I don’t use pork fat nor pork lard for health reason and I guess, most of us at home may not have easy access to these compared to vegetable oil. So, vegetable oil is a better option for me to make this dish. I am not a big fan of cockles, but you can definitely add them to have more flavours and texture. Talking about texture, I tend to add bean sprouts at the very last stage to maintain its crunchiness and freshness. If you prefer to have softer texture of bean sprouts, just cook for a few more minutes.

Note: If you prefer to make simple chili paste from scratch at home instead of using those from the shops, you can prepare in big batches and freeze in small quantity (about 1 tbsp or less each) wrapped in cling film and formed into small packages. You will then have homemade chili paste at your disposal when you need. I make big batches by using about 300g dry chilies, soaked and deseeded. Blend until become a paste. Then, scoop about a tablespoon of the chili paste and place on a small pre-cut square cling film and form little package. Repeat until finish.

1. Mix all seasoning ingredients. Then set aside.

2. If using fresh flat rice noodles, the noodles usually come stuck together, gently separate them. If they are too oily, place on a kitchen towel to soak up some oil. If dried thick rice sticks are used, prepare according to packet’s instruction.

3. Heat wok on high. When it’s hot enough put in oil, then toss in prawns. Cook the prawns just turn opaque, add in chopped garlic. Stir and cook until the prawns turn pink. Push these ingredients to the edge of the wok, put in chili paste (if used). Stir fry for about 1-2 minutes until fragrant. Then, add in flat rice noodles. Pour in the seasoning mixture. Mix everything, give it a good stir and cook for 3-5 minutes.

4. Make a circular space in the middle of the wok by pushing all the ingredients to the edges of the wok. Add a little bit of oil if needed, then, crack in eggs and slightly scramble them, cook for 1 minute or so. Slightly push to the edge of wok. Toss in sliced fishcake and cook for 1-2 minutes to heat up as fishcakes bought from the shops are usually cooked.

5. Eventually, put in spring onions or Chinese chives if using, and bring all ingredients in the wok together and mix well. Lastly, add in bean sprouts, give it a good stir to make sure that all ingredients get mixed evenly. Serve hot.